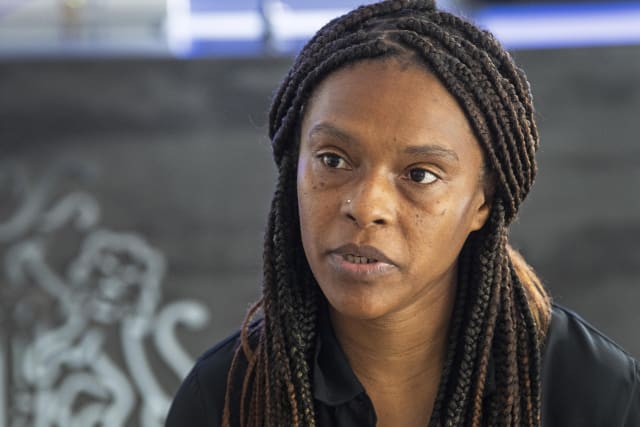 A grandmother has told of the "miracle" recovery of her two-year-old grandson after a bullet missed an artery by just 1mm when he was shot in the head.

Detectives believe the toddler's "brave" 27-year-old mother saved his life by putting her body between him and the gunman as she was herself shot seven times.

The boy's grandmother Lillian Serunkuma, whose 15-year-old son Quamari Serunkuma-Barnes was stabbed to death outside his school gates in 2017, said it was a "miracle" they both survived.

Two of Quamari's friends, both now in their late teens, were also wounded in the shooting in Energen Close, Harlesden, north-west London on the evening of June 3.

The two-year-old was rushed to hospital in a critical condition and doctors told his family that the bullet missed a crucial artery, which would have resulted in a fatal injury if damaged, by just 1mm.

"I think it's only by a miracle that I'm sitting here talking to you appealing for information about the perpetrator, when it could've been a completely different story," said Ms Serunkuma, speaking at Scotland Yard.

"It's remarkable that I can even be sitting here telling you about this.

"I saw my grandson on the floor with a gunshot through his head as well as my daughter, as well as the other two victims, so I can only see it as a blessing that I'm able to sit here and tell you about my grandson and his recovery."

She said her grandson has surprised doctors by waking up from an induced coma and is now talking and giggling.

Detectives believe the attacker fired a handgun at one of the teenagers, then shot into a car containing the boy, his brothers, aged eight and six, their mother and another teenager, before fleeing the scene on a motorbike.

Ms Serunkuma had been looking after her grandchildren for the day when the gunman approached.

"It's a bit surreal because I would never anticipate I would be in a situation like that," she said.

"He then approached the person next to me, shot at that person and then continued to walk towards my daughter's car.

"I called out because the kids were there.

"He was oblivious to anything I was saying and he was very calculated in his movements.

"He didn't have any regard for anybody who was there or whether they were his intended victims or not.

"He approached my daughter's car and started shooting in the driver's side of the car.

"He proceeded to go round to the other side, by which time my daughter and another young victim had tried to escape through the passenger's side.

"They ended up on the floor.

"He stood over them, with the baby and continued shooting.

"There's no doubt in my mind that he was aware there was a mother and a child there.

"And there was actually three kids, not just the one who got shot. He didn't care."

Scotland Yard's Detective Chief Inspector Pete Wallis praised the actions of the boy's mother, which he believes saved the life of her son as she shielded him from bullets.

"I believe she was extremely brave," he said.

"She put her body between her child and the gunman.

"If she hadn't have done so the child would've been in grave danger."

He said Ms Serunkuma, her daughter and child have no criminal links, but police are investigating whether the shooting is connected to gang tensions in the area.

Three other men, aged 29, 23 and 36, arrested on suspicion of assisting an offender, have all been released under investigation.

Ms Serunkuma is appealing for information to help bring the gunman to justice and said: "His mindset is not correct.

"There's no way someone could be as cold and callous as to shoot a child.

"There's nothing I can say to him.

"But to anybody who does know him it has to be made clear you're protecting someone who could be a danger to yourself if he feels that taking a child's life is nothing to him."

She said the shooting has brought back painful memories coming around three and a half years after she lost her son, Quamari, who was knifed three times in an attack outside Capital City Academy in Willesden, west London, on January 23 2017.

Ms Serunkuma branded his then 15-year-old killer's actions as "pure evil" in a statement read at the Old Bailey as he was locked up for at least 14 years after being found guilty of murder.

"You never gave Quamari a second chance to defend himself," she wrote at the time.

"You took his life in a cold and malicious way."