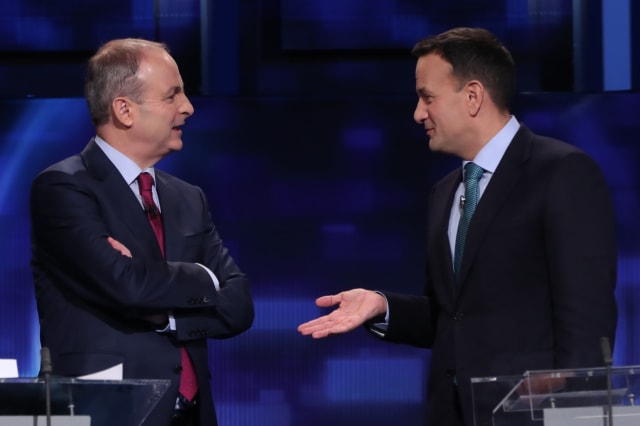 Four months of political deadlock in Ireland have been broken with the agreement on a programme for government.

The two centre-right parties Fianna Fail and Fine Gael, which emerged from opposing sides of Ireland’s civil war in the 1920s, have held power since the formation of the state. But never at the same time.

This will be the first time the two civil war parties will go into coalition together.

The move comes after an inconclusive February 8 election, which saw Sinn Fein win the popular vote and its record number of seats in the Dail.

But its attempts to form a left-wing coalition in the wake of the poll failed, after being unable to muster the numbers to secure the 80 seats needed for a majority.

Both Fianna Fail and Fine Gael had repeatedly ruled out going into government with Sinn Fein, citing the party’s links to the IRA and a clash in policies.

Fianna Fail and Fine Gael required the Green Party to secure their own majority after the Labour Party and the Social Democrats ruled themselves out.

Months of negotiations reached make or break point in recent days, as a government is needed imminently to pass new laws and to uphold a 6.5 billion euro package of support measures for businesses affected by Covid-19.

Sections of emergency anti-terrorist and anti-organised crime gang legislation are set to lapse at the end of June if a new government is not formed.

The Upper House of the Irish Parliament, known as the Seanad, needs to be in session to renew those laws.

Senators were elected after the general election campaign, but it is up to the taoiseach of the new government to nominate 11 additional senators – which means there is added pressure to have a new head of government in place.

The provisions of the Offences against the State Act and the Criminal Justice Amendment Act 2009 are renewed each year by the end of June through a motion in the Dail and the Seanad.

If the laws are not renewed by June 30, then non-jury trials for certain offences will not be allowed to go ahead.

Now that the deal has been agreed, it needs to be ratified by grassroots members from each party – however, each party has different rules.

The Green Party requiring two-thirds support from their 2,700 members – a higher amount than the other parties which means a deal could yet be scuppered as some grassroots Green Party members have expressed concerns about going into a coalition with two large centre right parties and their commitment to reducing carbon emissions.

Fianna Fail need a simple majority of its more than 15,000 members – some members have expressed concern about going into government with Fine Gael for the first time but its members are expected to pass it.

Fine Gael have an electoral college system which gives the greater weight to its TDs, Senators and Councillors than the party membership.

If it is passed by the various memberships, it is expected that a new government will be in place for the end of June or the first week of July.

Fianna Fail leader Micheal Martin and outgoing Taoiseach and fine Gael leader Leo Varadkar are set to share a “rotating taoiseach” position, with Mr Martin taking the role for the first two years of the government.

Green Party leader Eamon Ryan has ruled himself out for the role, but has not ruled out taking the deputy leader or tanaiste role.