Face coverings: What does the law say? 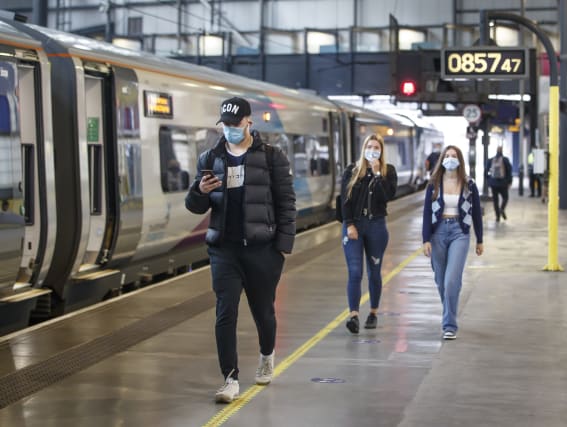 Face coverings are now mandatory on public transport in England.

Passengers caught not complying with the regulations risk being fined £100 and removed from services.

We take a look at the new laws:

– What does this mean?

It is mandatory to wear a face covering – meaning anything which covers someone’s nose and mouth – while using public transport unless you have a reasonable excuse.

The rules apply in England and in English airspace or sea where passengers are due to arrive in the country.

Public transport is defined as “any service for the carriage of passengers which is available to the general public” and includes buses, coaches, trams, ferries, aircraft, trains, the London Underground and water taxis.

The law does not apply to anyone who is completing a journey on public transport which began before June 15.

– Are there any exceptions?

Taxis or other private hire vehicle services, school transport and cruise ships are exempt from the rules.

Children under the age of 11, operator staff, transport officials, police officers and other emergency service workers while on duty also do not have to comply.

If someone is in a cabin or “other similar accommodation” alone or with members of their household (including a permitted household they are linked to) or they are staying inside a vehicle while using public transport, they are exempt.

People who cannot put on, wear or remove a face covering without severe distress or because of a physical or mental illness or impairment or disability have a reasonable excuse – meaning they are exempt from the rules.

The law does not apply to lip readers travelling with another person who relies on them to communicate.

Face coverings can be removed to avoid harm or injury or the risk of this to themselves or others, and if they do not have one with them because they are travelling to avoid injury or flee a risk of harm.

If it is “reasonably necessary” to eat or drink, in order to take medication, or they are requested to remove a face covering by police or officials.

– What happens if I do not wear a face covering without a reasonable excuse?

You could be stopped from boarding public transport, taken off a service or told to put on a face covering and told to make sure children in your care, who are older than 11, comply.

Police can use “reasonable force” if necessary to ensure someone follows the instructions.

But according to guidance issued to police forces, the regulations “do not give officers the power to direct the removal of a face covering or the ability to forcibly remove a face covering from the wearer” although other powers may apply.

– How long are the rules in place?

The Government must review the regulations within six months and the law expires after a year, if not already scrapped.