China tea sets, buttons and bras – what customers bought as the shops reopened 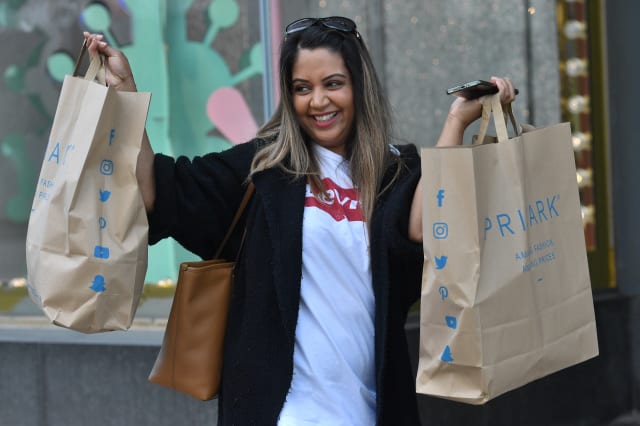 From a china tea set to face masks and buttons, shoppers got their hands on a wide range of products when they embarked on their first trips back to stores since lockdown.

Explaining why they had chosen to venture out to the high street as soon as it reopened, many said they wanted clothes or shoes and one even headed out just to get a mobile phone screen protector replaced.

In some places queues formed several hours before shops were due to open their doors.

The range of items wanted by shoppers was evident when John Lewis reported the first products sold in the two stores it reopened on Monday.

A china tea set was the first item through the tills at its Kingston store, while an iPhone 11 was the first purchase at its Poole store in Dorset.

The firm explained that the popularity of buttons appeared to be down to the items being used in conjunction with face masks to stop the elastic straps rubbing behind the ears.

They are also thought to have been wanted by people who have taken up sewing and knitting during lockdown, requiring buttons for their handmade goods.

Other popular items sold on Monday were pillowcases and bed sheets, televisions and printer cartridges, the company said.

One shopper at Birmingham’s Primark store said it had been “a delight” to return to the city centre shop, which like other stores saw large queues that morning.

She told the PA news agency: “It took a long time but I bought a lot of dresses, nightwear and bras.

“I have missed it a lot and I’m really happy.”

A lengthy queue formed outside Nike Town in London’s Oxford Street hours before it opened at 11am, with staff urging people to keep a safe distance from each other as the tightly-packed crowd formed round the door.

One shopper said having to queue had caused her to think twice about going shopping, as she waited outside the Apple store on the capital’s Regent Street.

Kristina Taylor, 40, who works in finance, told PA: “I just need to have my screen protector replaced, that’s all.

“It’s just something that has been niggling me since day one.”

Asked if she was pleased about shops reopening, she said: “Yes and no.

“I will pop by Primark to see the queue.

“But not keen on all of this queueing, it makes me think twice about whether I need something from that shop.”

Marks and Spencer said it had kept a “big focus on comfortable casualwear as customers spend more time at home” but had also dedicated more space in its shops to childrenswear.

Sacha Berendji, M&S’s Retail, property & operations director said the retailer believes “there is a demand as the kids have still been growing and spending less time in uniform”.