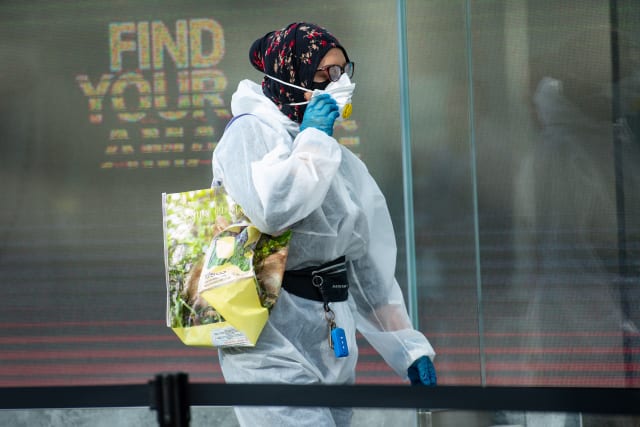 Shoppers wore masks, were invited to sanitise their hands and declared it was “good to be back” as they hit England’s newly-reopened high street.

Lines of customers eager to buy clothes, shoes and other items formed early – with one woman spotted in a full-length hooded protective suit.

Department stores and high street shops are welcoming shoppers back for the first time in three months, and many have a new look with more spacious floor plans, limited numbers of customers and signage reminding people to stay two metres apart.

Businesses have had to ensure they are “Covid-secure” according to Government guidelines, and many have been keen to stress the extra precautions they are taking, from deep cleaning stores to putting items that have been tried on or returned in quarantine.

Masks are now mandatory on public transport but are not compulsory in shops, although customers queuing for the Apple store on Regent Street in central London were told they must wear face coverings once inside.

Shoppers were told to use hand sanitiser as they walked into Primark in Oxford Street, and some customers wore gloves as they browsed the rails.

Dispensers have been stationed at the shop’s entrance, where members of staff are observing customers as they enter.

A queue of people also waited outside Nike Town on Oxford Street shortly after 9am, ahead of the store’s opening at 11am.

Ricky Young, who turned out to buy trainers, said it felt like a return to some kind of normality.

Asked if he expected it to be busy, the 38-year-old plasterer told the PA news agency: “No, I actually thought people might have been sleeping or didn’t want to go out.

“But the doors are open again, it’s back to almost normal, back to business – but we just have to line up.”

London’s West End is expecting around 80% fewer visitors when it reopens on Monday.

Primark, which will open each of its 153 English stores, has pledged to ensure basket handles are cleaned after each use and that every second till will be closed to maintain social distancing for customers and employees.

A shopper who emerged from Birmingham’s Primark store clutching three bags said: “It’s good to be back – it seems like forever since I’ve been in a clothes shop.”

The long-awaited reopening “marks a crucial time for thousands of retailers and hundreds of thousands of jobs”, the British Retail Consortium said.

Councils across the country will be making use of the Government funding to safeguard high streets, taking measures including deploying council staff or volunteers to provide help and advice, creating more pedestrianised space and ensuring  more frequent street cleaning.

Department store John Lewis is initially reopening two of its stores, in Kingston and Poole, as part of a phased approach, with 11 others to follow on Thursday.

Andrew Murphy, executive director of operations, told PA he hoped the range of options still available to customers will leave them “pleasantly surprised”, such as trying on shoes after being given disposable pop socks and lying on beds or testing pillows with single use disposable covers.

He said due to limits on the number of people allowed in-store customers would also likely be struck by the “relative calmness of the experience”.

Government guidance says items that have been tried on should be isolated for 72 hours or cleaned before being returned to the shop floor, and that changing rooms should remain closed where possible.

John Lewis, while keeping its fitting rooms shut, is piloting a virtual personal shopper in some stores in the coming weeks.

Technology will also be used for a planned trial of a virtual queuing system for John Lewis and Waitrose, using a customer’s phone to alert them to their position as they wait in a car or run other errands.

Mr Murphy said: “We expect this situation to last well into autumn and perhaps winter so we need to be thinking ahead for how things will work when the weather’s not so great.”

Shoppers at Selfridges – which is reopening its London, Manchester and Birmingham branches – will have the chance to try before they buy, but any clothes will then be quarantined, while shoes and accessories will be cleaned with sanitising spray or steamed.

Waterstones will quarantine books which are browsed but not bought, while HMV will insist on hand sanitiser if music-lovers wish to flick through records in its A to Z section.

Many stores are encouraging customers to make purchases by contactless card payments, with limits increased to £45.

Arcadia – which owns the likes of Topshop, Miss Selfridge and Dorothy Perkins – had originally said it would not take cash payments, but on Monday changed its position to say while it will encourage the use of contactless, it will now accept cash.