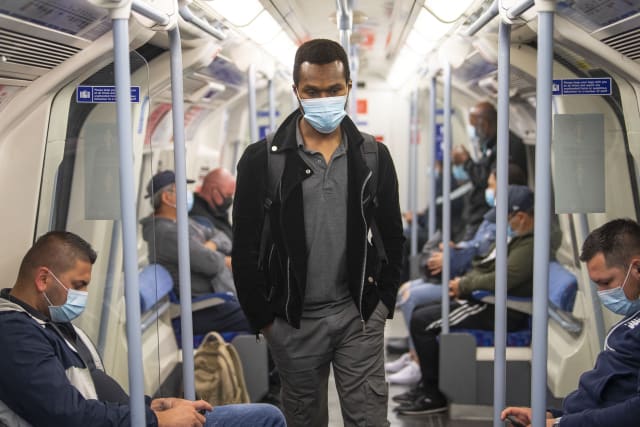 Around four out of five Tube and bus users in London wore a face covering on Monday as they became mandatory on public transport in England, the city’s transport commissioner said.

Mike Brown told the PA news agency that the response of passengers had “exceeded my expectations” after the new rule was announced on June 4.

He said: “More than 80% (compliance) is what we’re seeing in observations.

“Certainly quite a significant uptake.

“For the first day, I’m really pleased the way passengers are responding as I would have expected them to do so.”

More than 3,000 additional staff from British Transport Police, Network Rail, train operators and Transport for London (TfL) are being deployed at major stations and transport hubs to ensure the new rules are being followed.

The regulations fall under the Public Health Act 1984 and make face coverings mandatory on buses, coaches, trams, ferries, aircraft and trains in England.

People with certain health conditions, disabled people and children aged under 11 do not have to wear one.

Passengers caught not complying with the regulations risk being fined £100 and removed from services.

But Mr Brown said he was “not aware” of anyone being prevented from travelling in London on Monday because they were not wearing a face covering.

“Our focus very much for the first few days has got to be about encouraging people and educating,” he explained.

Hundreds of thousands of face coverings are being handed out free of charge at railway stations across the country and London’s public transport hubs.

In Northern Ireland, Scotland and Wales, face coverings are not mandatory, but are recommended.

Face coverings can be a scarf, piece of cloth or mask.

TfL figures show there was a 17% increase in the number of Tube journeys made on Monday up to 10am compared with a week earlier.

Motor traffic in cities across the UK was also up on Monday.

Data published by location technology firm TomTom showed the congestion level in London at 3pm was 27%, up from 25% during the same time last week.

The figures represent the proportion of additional time required for journeys compared with free-flow conditions.