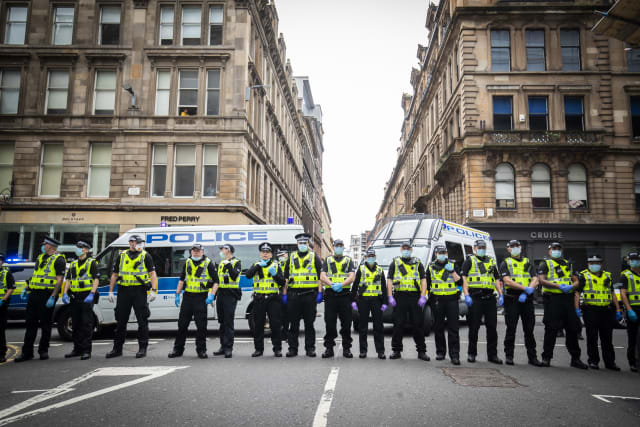 Scotland’s First Minister has branded protesters “utterly shameful” as police were able to avert a major clash with an unknown group.

Hundreds of people descended on George Square in Glasgow to call for the statue of Metropolitan Police founder Robert Peel to stay in place in an event organised by a group called the Loyalist Defence League, after a protest was organised to call for its removal.

The original protest, organised by the Glasgow Youth Art Collective, was postponed due to what organisers say was a lack of access to the square and “police targeting activists”.

The First Minister welcomed the cancellation of the protest.

“I say to anyone that has found themselves on the streets of Glasgow in an altercation with other groups or with the police, that they should really take a long hard look at themselves.

“That is not acceptable behaviour at any time, but at this time of crisis that the country faces, I think it’s particularly shameful behaviour.”

A small group of people, whose affiliation is not known, could be seen coming down North Hanover Street prompting hundreds of counter-protesters to begin running towards the group before police were able to get in between the two.

Missiles could be seen flying between the two groups as police, with their batons drawn, formed a line across the street.

The unknown group were forced back up North Hanover Street, away from the square.

Police Scotland confirmed the group is not believed to be affiliated with the Black Lives Matter movement, which has been protesting across the country in recent weeks after the death of George Floyd in Minneapolis.

There were no reported arrests as a result of the altercations.

The First Minister said it was still an “ongoing incident” but that she had every confidence in Police Scotland to keep the peace.

She, along with other senior figures in the Scottish Government, urged protesters in recent weeks to find other ways to demonstrate than mass gatherings.

Press and photographers covering the protest were repeatedly told by protesters to stop taking pictures and video.

“At this time the incident does not appear to be connected to a Black Lives Matter protest.”

The Glasgow Youth Art Collective said on its Facebook page: “We attempted to have a peaceful protest today in city in the style of a public consultation for the people of Glasgow to decide what would be best to happen to the racist and anti-working class statues of George Square.

“Due to the police targeting activists before we were able to gather and no easy access to the square, we have decided to postpone today’s demo.”

Responding to the statement from the organiser, Mr Murray said: “Police will always facilitate peaceful protest where practical and safe to do so, but overall public safety of all those concerned is a key consideration.”