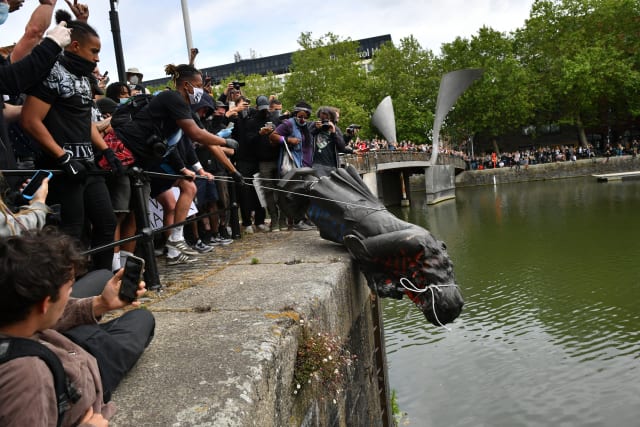 The directly-elected Mayor of Bristol has defended not removing the statue of slave trader Edward Colston earlier and consigning it to a museum.

The statue of the 17th-century merchant was toppled by Black Lives Matter campaigners during a protest a week ago and thrown into Bristol’s harbour.

Since the toppling of the memorial, it has led to renewed scrutiny of public figures in British history and how their contributions are acknowledged.

There has also been criticism that by not removing Colston’s statue earlier – and leaving it to protesters to take the law into their own hands – it was a failure of democracy.

Marvin Rees said it was for previous administrations running Bristol City Council to explain why they had not removed it.

He said during his four years as mayor he had focused on tackling the social and educational inequalities that many members of the black and minority ethnic (BAME) communities in Bristol face daily – rather than symbolically removing a statue.

“One of the quips I’ve made recently is that I’m the first directly-elected black mayor in Europe and I turn up and suddenly the statue is my fault. How do we get to that?,” Mr Rees said.

“I was elected in the middle of austerity. You would have had to extend incredible amounts of political capital to enter into the debate over the statue.

“And that political capital would then take time and resource away from delivering affordable homes that are central to tackling race inequality, tackling education inequalities, tackling period poverty, as we have in this city, tackling food poverty, and we have about 20% of our kids experiencing food insecurity in Bristol.

“That is a pathway to tackling race inequality that we probably would have been pulled away from if we’d have put all of our resources into the statue.

“As I said, conversations go on about the name of the Colston Hall and the statue but what we’re not doing is saying it’s on our list of top 10 activities to deliver a fairer, more inclusive, sustainable city – removing a statue is not on that list.”

Colston’s statue, which has stood in the city centre since 1895, was retrieved from the city’s harbour on Thursday and will go on display in the M-Shed museum along with placards from the protest.

Mr Rees was speaking to Radio 1 DJ Annie Mac for her podcast series Changes With Annie Mac, which is broadcast on Monday.

He said he was “dismayed and quite frustrated” with the comments of Home Secretary Priti Patel who had described the toppling of the statute as “utterly disgraceful”.

“What we had was one piece of criminal damage and 10,000 people went home.

“They’ve left us in a situation now where we can have a constructive conversation in Bristol about how we build for the future, how we deal with the legacy of Bristol slavery.”

Mr Rees was asked what he thought about people calling for the statue of Sir Winston Churchill in London’s Parliament Square to be removed.

“One of the things I think that we’re having to contend with is that history is complicated and contradictory,” he said.

“There can be lots of things true at the same time. Churchill was a Second World War hero, Churchill fought against fascism and Nazism.

“I’m not an expert, but clearly he played a pivotal role being prime minister against Hitler and fascism.

“Yes, Churchill was a racist. Yes, these things are true.

“Our job is as a population to say rather than just trying to emphasise one and hide the other, why don’t we recognise all of them and then decide how we relate to the extent to which we celebrate all, give places of honour or even record them as public figures?”