Boris Johnson ‘must show leadership’ on inequality and racism in UK 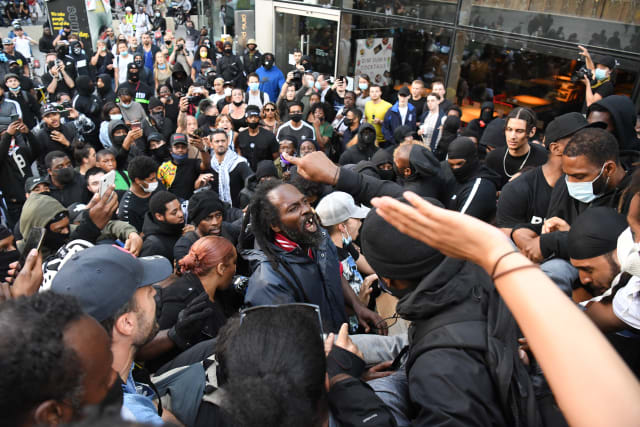 The Prime Minister has been urged to show leadership in dealing with racism in the UK, as tweets he sent about Winston Churchill’s statue were branded a “deflection”.

More than 100 people were arrested on Saturday at a far-right protest in London, which was condemned by Boris Johnson as “racist thuggery”.

A 28-year-old was arrested on suspicion of outraging public decency after a man was photographed apparently urinating next to the memorial dedicated to Pc Keith Palmer, the officer who was stabbed to death in the 2017 terror attack in Westminster.

Six police officers suffered minor injuries in violent clashes as several hundred demonstrators, mostly white men, attended the protest organised by far-right groups which claimed they wanted to protect statues such as that of Churchill from vandalism.

But the demonstration turned violent after hundreds of self-proclaimed “statue defenders” took over areas near the Houses of Parliament and Trafalgar Square and hurled missiles, smoke grenades, glass bottles and flares at police officers.

Shadow home secretary Nick Thomas-Symonds said he was “extremely disturbed” by the “completely unacceptable” scenes of violence on the streets on Saturday.

He said Mr Johnson needs to set out “concrete steps” to address “the inequality and racism that still sadly exists in our country”.

The Torfaen Labour MP told Sky News’ Sophy Ridge on Sunday show: “The Government needs to show leadership on the inequality and racism that still sadly exists in our country, and by that I mean the Prime Minister.

“The Prime Minister needs to come forward, show that he understands the hurt and the anguish of the stories that black people in our country have spoken about so movingly in recent weeks, and also to set out the concrete steps that his Government now intends to take to address that.”

Mr Thomas-Symonds also said there has been a “chronic failure of political leadership” by the Government in addressing the Windrush scandal.

“Now of course I’m pleased for those 60 people, but we’re talking about thousands of people who were wronged over generations.

“That such a small number has been compensated – only that number – is a chronic failure of political leadership. The Government needs to focus, it needs to step up to the plate and it needs to act,” he said.

In a series of eight tweets on Friday, Mr Johnson said to take statues down would “be to lie about our history”.

He tweeted: “The statue of Winston Churchill in Parliament Square is a permanent reminder of his achievement in saving this country – and the whole of Europe – from a fascist and racist tyranny.”

Speaking on the BBC’s Andrew Marr Show on Sunday, Tottenham Labour MP Mr Lammy said: “Boris Johnson sent out eight tweets, I think it was, on Friday on Winston Churchill and statues.

“This feels to me like a bit of a deflection. Let’s get to the action, let’s have some substance, let’s do something about these historic injustices that still exist in our country.”

Many of those present in London on Saturday were drinking, and there were a number of clashes with police in riot gear as crowds chanting “Tommy Robinson” and “England” while raising their arms and surging towards lines of officers.

Outbursts of violence continued around the city after the 5pm deadline had passed, and, by 9pm, more than 100 people had been arrested for offences including breach of the peace, violent disorder, assault on officers, possession of an offensive weapon, possession of class A drugs, and being drunk and disorderly.

Six of these patients, all members of the public, had to be taken to hospital.

The violent scenes in Westminster contrasted with peaceful demonstrations that took place at Hyde Park and Marble Arch by anti-racism protesters in support of the Black Lives Matter (BLM) movement.

Meanwhile, Conservative MP Tobias Ellwood, who gave first aid to Pc Palmer as he lay dying after being stabbed to death in the grounds of Parliament by Khalid Masood in 2017, said the image of the man urinating next to the memorial was “abhorrent”.

On Friday, statues in Parliament Square – including Winston Churchill, Nelson Mandela and Mahatma Gandhi – were boarded up to prevent them being targeted by protesters both from the Black Lives Matter movement and far-right groups.