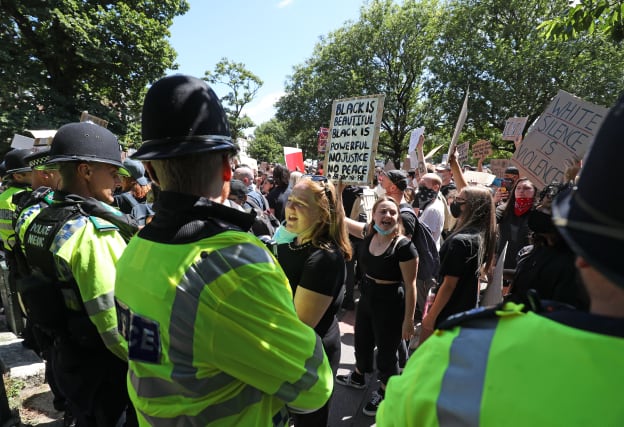 Thousands of protesters have marched through Brighton in solidarity with the Black Lives Matter movement worldwide.

Forming a mile-long line along the seafront, activists wearing black clothes and masks and holding signs aloft staged a silent protest on Saturday afternoon before heading off on the march.

But as protesters passed the war memorial in the East Sussex city, they faced off across a police divide against a small group that was occupying the stone monument.

Shouts of “Say his name, George Floyd” were met at least once with “Rule Britannia” from behind the heavy police presence.

Earlier as they lined up along the seafront, activists did their best to social distance as they alternated silence and applause in memory of George Floyd, who died while being restrained by police in the US last month.

It came as people across the world continue to express outrage over the death of Mr Floyd, a black man who was held down by a white policeman, and over racism in society.

At about 1.45pm, the protesters began to loudly chant “No justice, no peace” and “Black lives matter” as they marched through the city streets.

Lines of police maintained a divide between the anti-racist activists and a group of people who had assembled at the war memorial.

Police at the scene told the PA news agency that the gap between the two groups was being maintained to allow both to have their say.

Ahead of the silent protest, organiser Ellie Ruewell said to those planning to attend: “We will be lining the closed Madeira Drive road along the seafront to show solidarity to all BIPOC (black, indigenous, people of colour) communities who continuously and tirelessly have their human rights challenged and fear dangerous oppression from authorities and governments alike.

“I need to again stress this is a peaceful, silent protest where we stand in solidarity.”