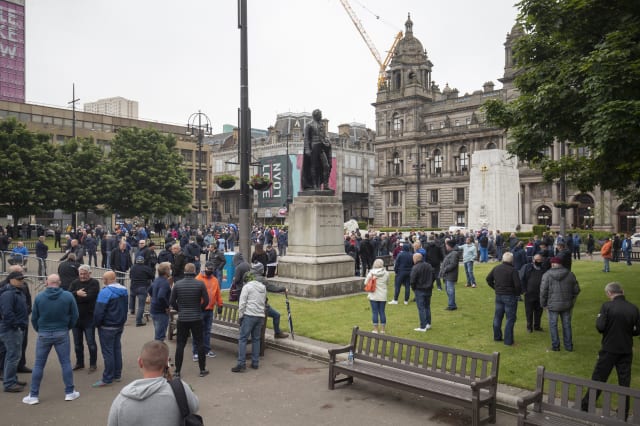 Police Scotland has expressed its “disappointment” with Black Lives Matter campaigners who attended events across the country.

Protests took place in towns and cities including Aberdeen, Glasgow and Edinburgh on Saturday in response to concerns over institutional and violent racism.

In recent weeks, clashes have occurred during protests sparked by the death of George Floyd in the US city of Minneapolis while in police custody.

Officers have expressed concern over a lack of social distancing at the rallies.

Assistant Chief Constable Gillian MacDonald said: “I am disappointed that some people chose to ignore the advice and attended a number of the events across Scotland.

“However for those who did attend, I would like to thank you for conducting your protest in a peaceful manner.

“An appropriate policing response was put in place for the events and these passed without significant incident.

“We would encourage everyone to continue to follow the Scottish Government’s regulations and guidance to aid the collective effort to protect the NHS and save lives by preventing the virus from spreading.”

A 62-year-old man was arrested and charged with a minor public order offence which took place close to, but was not associated with, the demonstration in Edinburgh.

He was held in custody and is due to appear in court on Monday.

Separately, hundreds of people flocked to George Square in Glasgow to “protect” the war memorial.

In an event organised by a group called the Loyalist Defence League (LDL), people said they had gathered to stop vandalism to the Glasgow Cenotaph, erected to commemorate the lives of those who died in the First World War.

The group was penned in on the east side of the square, with a similar sized area reserved for counter-protesters which remained empty.

Some protesters across Britain have defaced war memorials in recent weeks, and a group in Bristol pulled down a statue of Edward Colston and dropped it into the city’s harbour, due to his involvement in the slave trade.

A video posted on the Twitter page of the LDL said: “Across the UK we have had far left thugs violently defacing our war memorials/cenotaphs.

“In some cases they’ve daubed graffiti upon the statues and even pulled them down.

“These war memorials and monuments have been built to remember and respect the many people who have paid the ultimate sacrifice in maintaining the very same liberties, justice and freedom that these thugs claim they’re fighting for when in reality they are just using it as an excuse to riot, thieve and assault.”

The footage ended with “no surrender” superimposed over the LDL crest.

There was a heavy police presence in Glasgow city centre, with at least 12 visible officers and a number of police vans stationed around George Square.