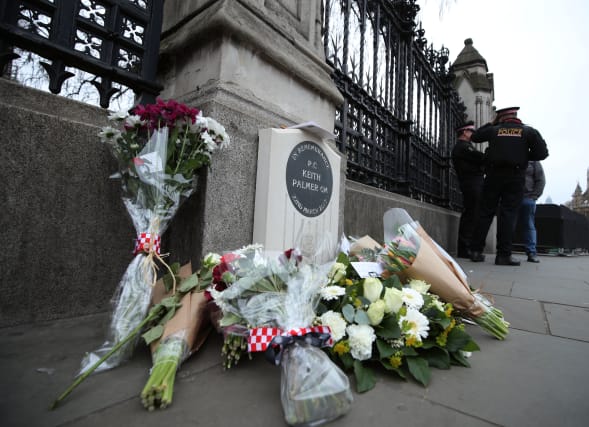 The man who urinated next to the memorial dedicated to Pc Keith Palmer should be sent to prison, the chairman of the Metropolitan Police Federation said.

Ken Marsh condemned the “disorder and unruliness” witnessed at the far-right protests in London on Saturday, which saw violent clashes between demonstrators and police.

A picture circulating online shows a man, who was part of the protest, urinating next to the memorial of Pc Palmer, the police officer who was stabbed to death in the 2017 terror attack in Westminster.

Speaking to the PA news agency, he said: “It’s horrendous. The man urinating next to Keith Palmer’s memorial is disgusting.

“How can a human being behave like that? I don’t get it, it’s beyond belief.

“A faction of people today [Saturday] only had one intention – to be violent and unlawful, they didn’t come here to protect the statues, it’s just disorder and unruliness.

“I suggest serious custodial sentences in relation to assaults on police and others, criminal damage and urinating next to the memorial of heroes.”

His views were echoed by Senior Tory MP Rob Halfon, who described the protester’s behaviour as “horrific”.

Mr Halfon, the chair of the Commons Education Committee, said he hoped the perpetrator was tracked down and jailed.

“This is just so horrific. I hope they find this individual and lock them up and throw away the key,” he told the PA news agency.

“This is not the kind of country we are. I feel every possible good wish to the family of Pc Palmer, who did so much to keep us safe.”

The Father of the House of Commons, Sir Peter Bottomley, said the protester should be “ashamed”, and that people with him should have intervened to tell him his actions were wrong.

“It is the kind of behaviour that should make anyone ashamed,” he told the PA news agency.

“If people had the courage of Keith Palmer they would know they should intervene and say to anyone doing that kind of thing: ‘Don’t.’

“I think the people who were with the person should have intervened. If you stand by and do nothing, bad things go on happening.”

MP Tobias Ellwood, who gave first aid to Pc Palmer as he lay dying after being stabbed to death in the grounds Parliament by Khalid Masood, said the image of the man urinating next to the memorial outside the Palace of Westminster was “abhorrent”.

The Tory MP for Bournemouth East and chairman of the Defence Select Committee, tweeted a picture of the man and wrote: “Absolute shame on this man.

“Of all the images to emerge over these few testing days I find this one of most abhorrent. Please help identify him.”

Masood ploughed into pedestrians on Westminster Bridge before stabbing Pc Palmer, and was eventually shot dead by a plainclothes close protection officer.

The officer was posthumously awarded the George Medal for bravery that “unquestionably saved lives”.

His memorial was organised by the Police Memorial Trust and unveiled in February 2019.