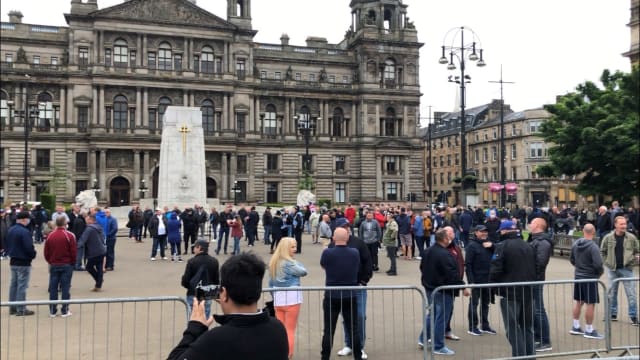 Hundreds of people have flocked to George Square in Glasgow to “protect” a war memorial.

In an event organised by a group called the Loyalist Defence League (LDL), people congregated to stop vandalism to the Glasgow Cenotaph, erected to commemorate the lives of those who died in the First World War.

The group was penned in on the east side of the square, with a similar sized area reserved for counter-protesters which remained empty.

In recent weeks, clashes have sprung up across the country during protests stemming from the death of George Floyd in the US city of Minneapolis while in police custody.

Some protesters have defaced war memorials and a group in Bristol pulled down a statue of Edward Colston and dropped it into the city’s harbour, due to his involvement in the slave trade.

A video posted on the Twitter page of the LDL said: “Across the UK we have had far left thugs violently defacing our war memorials/cenotaphs.

“In some cases they’ve daubed graffiti upon the statues and even pulled them down.

“These war memorials and monuments have been built to remember and respect the many people who have paid the ultimate sacrifice in maintaining the very same liberties, justice and freedom that these thugs claim they’re fighting for when in reality they are just using it as an excuse to riot, thieve and assault.”

The video ended with “no surrender” superimposed over the LDL crest.

There was a heavy police presence in the city centre, with at least 12 visible officers and a number of police vans stationed around George Square.