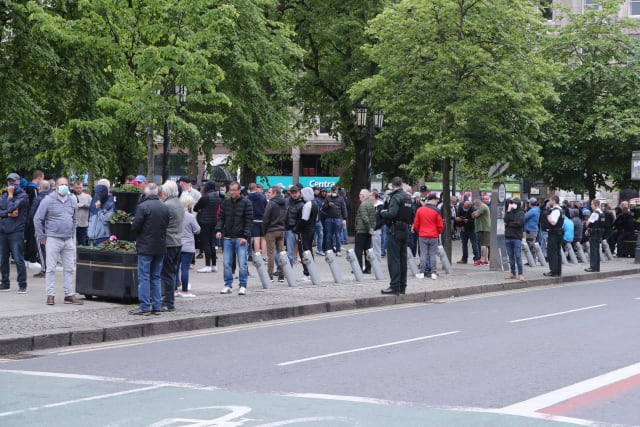 The Northern Ireland Cenotaph Protection Group (NICPG) issued a statement saying its aim is to protect war memorials amid attacks on statues of historical figures across the UK in recent days.

On Friday, statues in London’s Parliament Square including of Sir Winston Churchill, Nelson Mandela and Mahatma Gandhi were boarded up to prevent them being targeted.

The NICPG said: “We are not a counter protest, we do not have a political message. For those of us who served we served beside men and women of all cultural backgrounds, and those veterans that have been in combat know, above all else, regardless of what colour you are, we all bleed red.”

It insisted Saturday’s gathering “is not a protest or political movement”, adding: “We are there to protect and defend only, not to inflame the situation.”

Several of those taking part wore British military uniforms, while Union Jack and Ulster flags were draped over the railings of City Hall.

Many participants wore masks but social distancing guidelines were apparently not being followed.

The gathering ended at around lunchtime with a rendition of God Save The Queen.

Officers from the Police Service of Northern Ireland attended.

The force tweeted: “We are aware of the possibility of some pre-arranged gatherings planned for today. We would urge anyone considering attending to put public safety first and stay away. The Health Protection Regulations are still in place to prevent the spread of #COVID19.”

People were fined for taking part in Black Lives Matter protests in Belfast and Londonderry under lockdown restrictions last weekend.