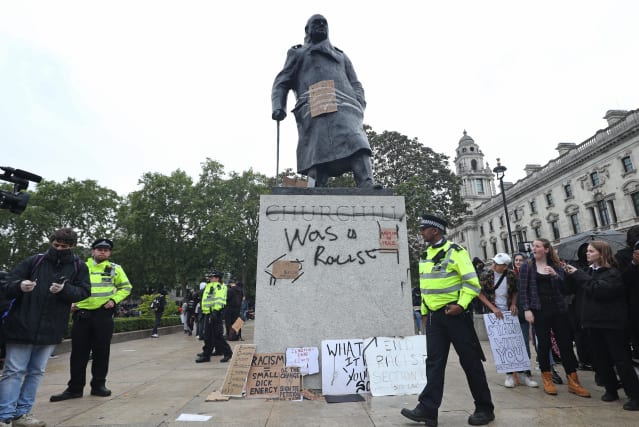 Sir Winston Churchill’s grandson has said he was “deeply upset” after his grandfather’s statue was defaced and has been boarded up ahead of more expected anti-racism protests in London.

Former Conservative minister Sir Nicholas Soames told the Daily Telegraph the incident, in which the word “racist” was scrawled on the monument, shows British society has “lost its compass”.

It comes as Home Secretary Priti Patel reportedly called for the statue in Parliament Square to be uncovered “immediately”.

Sir Nicholas backed PM Boris Johnson’s condemnation of disorder during last weekend’s Black Lives Matter protests, and said London mayor Sadiq Khan was right to heed police advice and board up the statue and the nearby Cenotaph.

“I find it extraordinary that millions and millions of people all over the world who look up to Britain will be astonished that a statue of Churchill and the Cenotaph, our national war memorial, could have been defaced in this disgusting way,” he told the Telegraph.

“These people who are marching did not set out to do this, but a very, very small, extremely explosive group of people who have made a practice of hijacking entirely responsible demonstrations are behaving in an unspeakable and cowardly manner.

“It feels like a society that has lost its compass.”

Ms Patel told the Daily Mail that Churchill was a hero of Britain “who fought fascism and racism in this country and Europe”.

“He has given us the freedom to live our lives the way we do today,” she said, adding that the decision to board up the statue was a “sad reflection” on Mr Khan’s mayoralty.

“Had he (Mr Khan) called out the minority in particular who were subversive in a peaceful protest, and had he pulled up the thuggery in the right way, we would not be seeing the boarding up of our national hero.”

The Metropolitan Police have told those planning on joining Saturday’s anti-racism demonstrations they must be off the streets by 5pm.

In an attempt to avoid a repeat of last week’s violent clashes with police, protesters have been told they must stick to the planned route from Hyde Park to Whitehall.

Officers fear the anti-racism protests sparked by the death of George Floyd in the US last month could be targeted by counter-demonstrations by far-right groups.