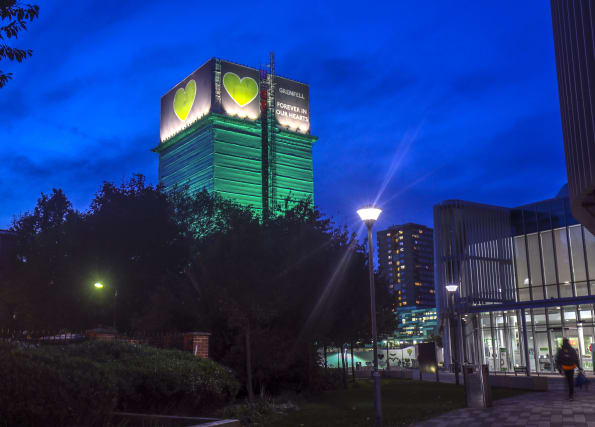 The Prime Minister and Labour leader have marked the third anniversary of the Grenfell Tower fire in video messages as the commemoration moves online due to the coronavirus.

Boris Johnson said the people of Britain were with the Grenfell Tower community “in spirit”, while Sir Keir Starmer pledged to do “everything in my power” to prevent such a tragedy happening again.

Sunday marks three years since a small kitchen fire in the west London high-rise turned into the most deadly domestic blaze since World War II.

The fire claimed 72 lives and more than 70 other people were injured.

In a video message to be relayed to a virtual service of commemoration on Sunday hosted by the Bishop of Kensington, Mr Johnson said the country was working to ensure such a disaster would not be repeated.

“We can all remember where we were three years ago today when we saw this tragedy unfolding on our screens and across the London skyline,” he said.

“That night, 72 men, women and children were taken from us in the cruellest of circumstances.

“As a nation, we are still dealing with the consequences of what happened and working to make sure it never happens again.

“While those affected by Grenfell are not able to gather in person, all of us in this country are with you in spirit.”

With Labour estimating there are still 56,000 people living in homes wrapped in the same flammable cladding as Grenfell, Sir Keir said there had been “little justice or accountability” for what had happened.

“In the midst of their suffering, the Grenfell community came together to campaign for justice, safe homes and change. Because no one should ever go through the loss and pain they experienced,” he said.

“But three years on and, unbelievably, tonight people will go to bed in unsafe homes.

“I support Grenfell United. We can all learn from their strength and determination.”

Meanwhile, the Fire Brigades Union (FBU) said high-rise residents faced a “postcode lottery” concerning how many firefighters would be sent to their building in the event of a blaze.

The FBU said “many brigades would not be able to mobilise anywhere near the scale” that was needed to tackle the Grenfell Tower fire, pointing out there is a large variation between the pre-determined attendance (PDA) levels – the number of engines sent as standard to high-rise fires – for different forces.

The FBU general secretary described the situation as “shocking” and “a chilling warning to the Prime Minister”.

Matt Wrack said: “Lives in London and the south east are worth no more than the rest of the country, yet different regions have drastically different standards.”

He said the loss of 72 lives at Grenfell was deeply traumatic, but said there was “a good chance that the next Grenfell will be outside London, in an area where fewer resources are mobilised to a fire, and the loss of life could be worse still”.

In tribute to each victim who died in the blaze, bells of London churches will toll 72 times and green lights will glow from tower block windows.

Faith leaders will conduct sermons and reflections online throughout Sunday and from 10.30pm, people in homes across the UK are asked to shine a bright green light from their screens to show solidarity with the bereaved and survivors.

The public inquiry into the disaster was paused in March because of the pandemic and is due to restart on July 6.

Remote workers could relocate to Barbados under new year-long visa