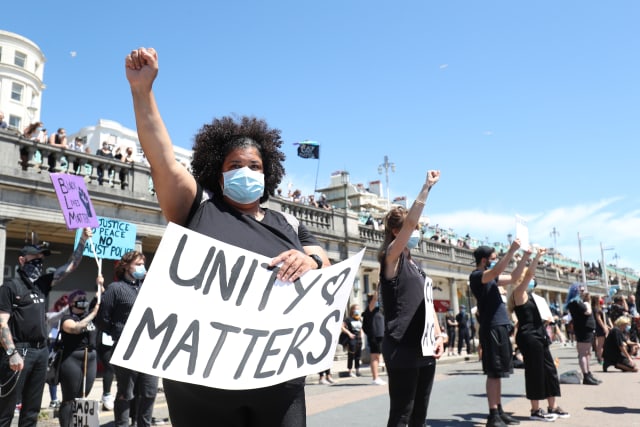 More than 1,000 protesters have gathered in Brighton to stand in solidarity with Black Lives Matter demonstrations worldwide.

Forming a mile-long line along the seafront, activists wearing black clothes and masks and holding signs held a silent protest on Saturday afternoon.

Anti-racist demonstrators poured in from all over the city for the event for the second week in a row.

It comes as people across the world continue to express outrage over the death of George Floyd in the US, and over racism in society.

Observing social distancing where possible, the Brighton protesters joined together in applause in the balmy sun.

Ahead of the silent protest, organiser Ellie Ruewell said to those planning to attend: “We will be lining the closed Madeira Drive road along the seafront to show solidarity to all BIPOC (black, indigenous, people of colour) communities who continuously and tirelessly have their human rights challenged and fear dangerous oppression from authorities and governments alike.

“I need to again stress this is a peaceful, silent protest where we stand in solidarity.”

Another echoed the phrase chanted across the world: “No justice. No peace.”

The demonstration was watched over by Sussex Police, with officers on foot and motorcycle seen at the edges of the crowd.

Many of the protesters were later expected to join a separate event, marching through the streets of the East Sussex city.