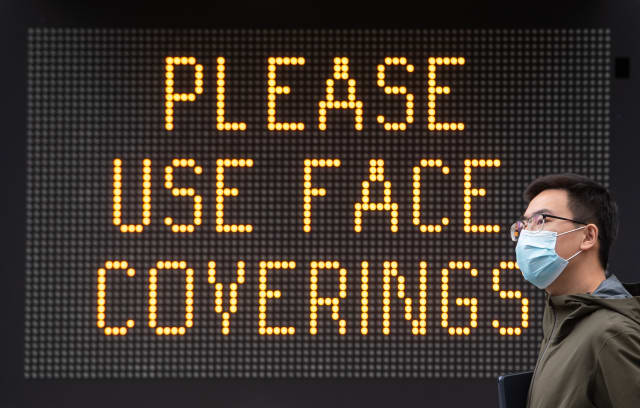 The reproduction number (R) for coronavirus across the UK remains between 0.7 and 0.9, although it has risen above 1.0 in some parts of the country.

On Friday, the Government Office for Science said the R value in England is 0.8-1.0.

It also published regional values for R for the first time  – but these came with a warning from experts that they are becoming less relevant.

The R value is the average number of people an infected person passes the disease on to and if that figure exceeds one, the disease could rapidly spread throughout the population again.

Experts say R is not the only important measure of the epidemic and it indicates whether the epidemic is trending towards getting bigger or smaller but not how large it is.

Therefore, the number of people currently infected with Covid-19 – and so able to pass it on – is very important.

R should always be considered alongside the number of people currently infected.

The estimates, published by the Government Office for Science, cover each of the NHS England regions.

As an average value, R can vary in different parts of the country, communities and subsections of the population.

It cannot be measured directly so there is always some uncertainty around its exact value.

When there are a small number of cases, estimates of R become less robust and less useful in determining the state of the epidemic.

The R values are shown as the range and the most likely estimate is in the middle of this range.

However, to avoid confusion, it will no longer be doing this as it feeds into the consensus of the R value published by Sage.

Matt Keeling, professor of populations and disease at the University of Warwick, said: “All the ranges are similar and overlapping so we cannot say that any one region is worse than any other region.

“All the ranges are closer to the critical threshold of R=1 than we would ideally like to see – which means that the epidemic is declining relatively slowly.

“This also means we haven’t got much wiggle room for additional relaxation of social distancing measures.”

He added: “As the number of cases becomes smaller in many regions, these predictions will become more uncertain and more biased by small localised outbreaks.

“These are not a measure of risk, they are about the decline of the epidemic.

“To understand risk you need to look at both the incidence of infection and individual behaviour.”