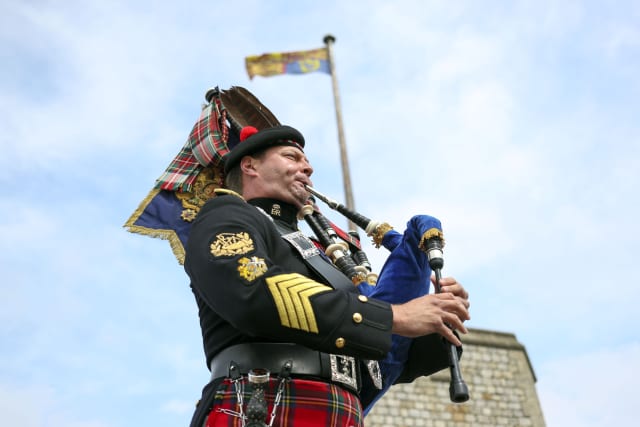 The Queen’s piper has led commemorations involving more than 500 players in a tribute to thousands of Scots killed or captured during “the forgotten Dunkirk” 80 years ago.

The Second World War battle led to 10,000 mainly Scottish soldiers from the 51st Highland Division being captured at St Valery-en-Caux in France on June 12, 1940.

They continued the fight on the continent in support of the French after the Dunkirk evacuations had been completed, and a flotilla of ships sent to rescue the troops was unable to reach them due to fog and the proximity of German artillery above the town.

Pipers from across the world took to their doorsteps at 10am on Friday to perform Heroes Of St Valery, composed by Donald MacLean, who was captured at St Valery and spent four years as a prisoner of war.

Pipe major Richard Grisdale, piper to the Queen, played the tribute at Windsor Castle, while the Prince of Wales took the salute from a piper at his Scottish home of Birkhall.

Charles, known as the Duke of Rothesay in Scotland, said: “On 12th June 1940, after a gallant stand, the 51st Highland Division with supporting arms and services, including elements from English regiments, was forced to surrender to the German army at St Valery-en-Caux on the Normandy coast of France.

“At 10am this morning, on this year’s 80th anniversary, pipers throughout Scotland and further afield were on their doorsteps playing the celebrated march, the Heroes of St Valery, in honour of the fallen and to remember a battle in which those of the division displayed the greatest courage and tenacity.

“We remember all who served and who sacrificed so much.”

It is thought the level of participants was a record for the greatest number of pipers playing simultaneously, with pipers from as far afield as Peru and Kathmandu taking part.

In Edinburgh, piper Louise Marshall led a procession from the French consulate to the City Chambers where wreaths were laid at the Stone of Remembrance by consul-general Laurence Pais and Lord Provost Frank Ross.

The day’s events also include a tribute concert broadcast online at 9pm, featuring performances from Celtic rock stars Runrig, the Red Hot Chilli Pipers and many others who have recorded tracks especially for the St Valery commemorations.

Lieutenant General Sir Alistair Irwin, president of Royal British Legion Scotland and Poppyscotland and a vice-president of RCET, said: “St Valery represents a hugely significant moment in our nation’s history and it is quite right that the bravery and fortitude of the great 51st Highland Division should be marked in this moving way.”

Members of the public are being asked to support the St Valery tribute through a fundraising campaign which will support the work of the three charities.