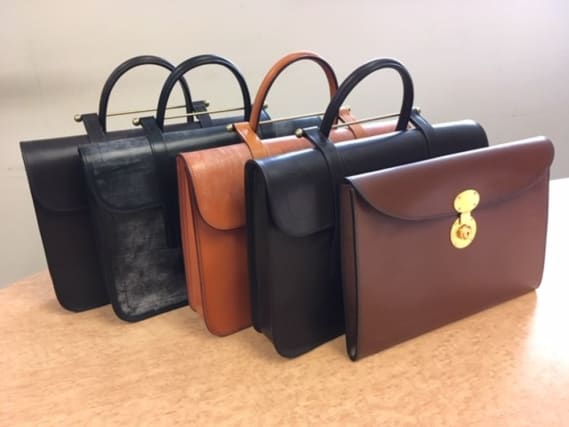 A business selling bespoke bridle leather bags has seen a 400% increase in sales, despite the lockdown, after making it big in Japan.

Almost three quarters of sales of the leather accessories made by Rutherfords, based in Cholmondeley Castle in Cheshire, make their way to the Japanese market.

Business founder Alex Hughes, 56, who started leatherwork as a hobby while recovering from cancer, said the company had seen its busiest time yet since the pandemic, with sales up four times on last year.

The firm, set up in 2014, has four employees and Ms Hughes has started an apprenticeship programme with the University of Chester for fashion and design undergraduates.

She said she was first approached by a Japanese distributor after he spotted bags she had made on eBay.

Ms Hughes, who grew up in India, said: “He sells all our stuff. We make everything here in Cheshire and we’re all self-taught.

During the lockdown the firm, which has been able to continue production with social distancing, has found a distributor in China and sold stock to Finland.

She said: “We have been busier than ever, particularly with the online side.

“We even had our first sale in the UK, to a lawyer in London.

“He rang me and he said he is normally so busy he just goes to standard shops and picks up the first briefcase he sees but now he has time to sit at home and look on the internet.”

She added: “What you have got to do is to have a positive attitude and look at it as an opportunity.

“The internet is the best thing. There is a technological revolution and we are living through it.”

The company has been praised by International Trade Secretary Liz Truss, who announced the start of trade negotiations with Japan earlier this week.

Ms Truss said: “Rutherfords is an example of how much a small business can benefit from exporting and how much more it could benefit from a Free Trade Agreement with Japan.

“Japan is one of our largest trading partners, and a new trade deal will help to increase exporting opportunities, boost investment and create more jobs.”