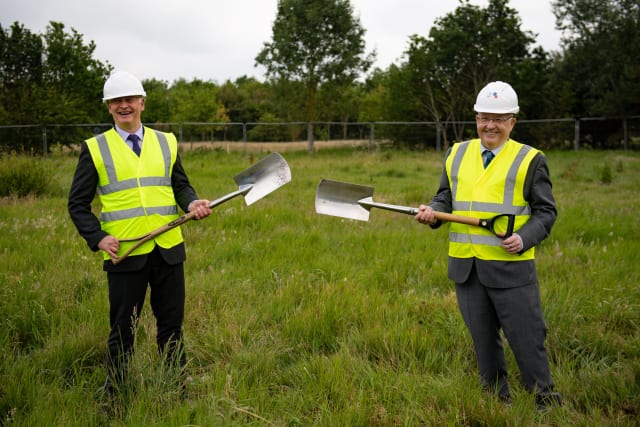 The fathers of two police constables killed on duty have taken part in a groundbreaking ceremony to mark the start of work on a £4.5 million memorial honouring all fallen officers.

Sir Hugh Orde, chairman of the Police Arboretum Memorial Trust, spoke at the event to commemorate police officers and staff killed in the line of duty since the 18th century.

The UK Police Memorial will stand at the National Memorial Arboretum at Alrewas, Staffordshire, commemorating all personnel who have lost their lives since the 1749 formation of the Bow Street Runners.

The fathers of Greater Manchester Police officers Pc Fiona Bone and Pc Nicola Hughes, who were murdered in 2012 while responding to reports of a burglary, cut the first ground on the project on Friday.

Pc Hughes, 23, of Saddleworth, and Pc Bone, 32, from Sale, were murdered by Dale Cregan in a gun and grenade ambush after being lured to a house in Mottram in Longdendale, Tameside.

Speaking after the ceremony, Pc Hughes’ father Bryn told the PA news agency: “It’s an honour to be asked to come and break the ground for such a fitting memorial to hundreds of police officers who we have lost while protecting the public.

“But in the same sense, at the back of my mind, there is only one reason why I am here and that’s because I’ve lost Nicola.”

Mr Hughes said of the memorial: “It’s vitally important. As a father, as a husband or a wife, you are never going to forget the person you’ve lost.

“But I think to have something like this – it’s more than important, it’s beyond words how important it will be for their memory.”

Pc Bone’s father Paul said: “It brings it back a little – what we went through in 2012.

“But it’s nice to be here and it’s nice that the memorial is going to be built here to remember not just Fiona but all the other 4,200 officers that have been killed.”

The physical memorial, due to be completed in 2021, will complement an existing online digital memorial, launched in November last year, to the thousands of officers and police staff who have died on duty.

Sir Hugh, chairman of the Police Arboretum Memorial Trust, said: “When we set out on this ambitious project in 2015 we had no idea how challenging it would be. Along the way we have overcome many hurdles and setbacks.

“But after five years of determination, amazing support and dedicated fundraising we have finally reached the position where construction of the new memorial can start.

“We have only been able to reach this point thanks to the generosity of individual benefactors, businesses, grant-makers, Government, police forces, staff associations and the wider public.”

Speaking at Alrewas after the ceremony, Sir Hugh added that the memorial would be a substantial brass structure.

“The memorial represents a half-open door,” he said. “It represents the dangerous space into which officers go, not knowing what’s behind that door.”

The new open-air memorial has been designed by Walter Jack and will include two low screens bearing the names of 2,000 police officers and staff, as well as spaces for reflection.

Sir Hugh, who is former chief constable of the Police Service of Northern Ireland, added: “The last few months have demonstrated to us all that we live in an uncertain world.

“Yet something we can be certain of, is that every day police officers will go out to patrol our cities, towns and villages, not knowing the dangers that they are likely to face or confront.

“Sadly there are some that won’t return home at the end of their shift.

“Their courage and sacrifice will now be commemorated and remembered forever here at the National Memorial Arboretum.”