Fast-track violent protester prosecutions ‘could cause miscarriages of justice’ 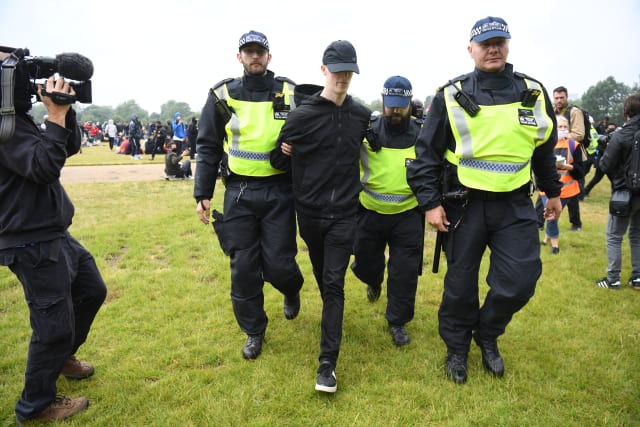 Efforts to jail violent protesters within 24 hours could lead to miscarriages of justice and courts will be unable to cope with the workload, lawyers have warned.

Justice Secretary Robert Buckland and Home Secretary Priti Patel are drawing up the plans based on the response to the 2011 London riots.

The bid to fast-track the court process comes as Black Lives Matter (BLM) and far-right demonstrations are expected this weekend.

Some courts have been told to prepare for longer days and weekend sittings with the plans mainly expected to apply to courts in urban areas including magistrates’ courts in London.

But the move has attracted some criticism from lawyers and human rights campaigners.

Caroline Goodwin QC, chairwoman of the Criminal Bar Association, warned: “Rushed justice is a risk of injustice or no justice at all, with the odds stacked in favour of police and prosecutors from the get-go.

“For justice to flourish we must have policing by consent not subjugation.

“No one wishes to see miscarriages of justice and peaceful protest must remain legitimate.”

While Raj Chada, head of the criminal defence department and a partner at firm Hodge Jones & Allen, described it as an “off the cuff, incoherent, knee-jerk reaction of a policy.”

He said: “Firstly, it is impracticable with the chaos that the courts are in. The court system cannot cope with this. I have no idea how they are going to fund this.

“Secondly, public order and protest can be a complex and difficult area, often done by specialist lawyers.

“There are often human rights issues or scrutiny of police powers.

“Rushing these cases through will endanger clients’ right to fair trial and lead to miscarriages of justice.”

Tom Wainwright, a criminal defence barrister specialising in protest rights at Garden Court Chambers, said the plan “draws parallels with the riots of 2011, and draws attention away from the fact that these are not riots but peaceful protests raising vitally important issues”, warning the proposals could risk defendants being “put under pressure to plead guilty, will not be given proper opportunity to receive legal advice, will not be given proper safeguards”.

He said there were “certain to be miscarriages of justice which will take more time to unpick at further cost to the taxpayer” and would cause “long-term damage” to those involved and to the reputation of the criminal justice system – which was already “in a state of collapse” before the coronavirus pandemic dealing with a backlog of thousands of cases.

Nine years ago the policy “relied to a large extent on the goodwill of defence practitioners – who aren’t paid overtime as court staff and the CPS may be”, he said, adding: “That goodwill has utterly dried up.”

Human rights group Liberty accused the Government of trying to “undermine protest rights by threatening protesters with heavy-handed criminalisation”, with its policy and campaigns manager Sam Grant adding: “This move prioritises channelling people into the justice system over ensuring their rights to protest and due process are respected.”

Barrister Ife Thompson, who founded Black Protest Legal Support UK, claimed: “This is what racialised justice looks like” when commenting on the plans on Twitter, adding: “One rule for us, another rule for others.”

The project has formed a group of lawyers willing to support those taking part in Black Lives Matter marches. A fundraising page has so far received more than £50,000 in donations.

A spokesman for Mr Buckland said the plans were aimed at people who were violent during the marches by assaulting police officers or carrying out other crimes, like vandalism and criminal damage, and not at peaceful protesters.

He added: “Twenty-four-hour justice is possible in some circumstances.

“We are not saying this absolutely will happen because we don’t know what the protests will be like, and the volumes of arrest, but the courts will need to stand ready.”

When asked whether the move would be possible with the number of cases already waiting to go through the courts, the spokesman said it had been possible in 2011 when there was a bigger backlog.