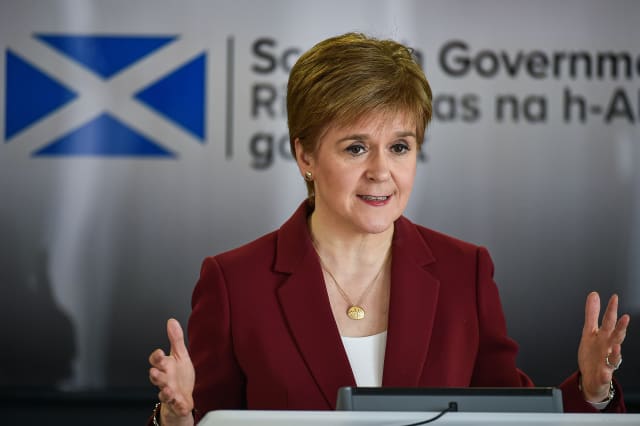 Nicola Sturgeon has called on the Treasury to extend financial support for workers and businesses, saying the alternative risks a surge in coronavirus cases or more job losses.

Speaking at the Scottish Government’s daily coronavirus briefing in Edinburgh, the First Minister addressed the UK GDP figures released on Friday showing a decline in April of more than 20%.

Ms Sturgeon said the record decline “confirms the scale of the economic crisis that has inevitably been caused by the health crisis we face”.

She said: “I have previously welcomed the UK Government’s interventions, especially the furlough scheme which has helped to preserve jobs during this period.

“But in my view is it now time to signal a further extension of Treasury support.

“Other countries have already made this move, including France where plans are being put in place for a long-term partial activities scheme covering possibly as long as the next two years.

“The alternative to extended support being put in place is either that businesses are forced to reopen before it is safe to do so, and that of course could damage health and it could cost lives, or businesses will have to take an even bigger hit and that will cost jobs.”

She said the Scottish Government wants to “work constructively” with the UK Government on the issue, adding when figures are published on Scotland’s labour market on Tuesday they are likely to show an impact on jobs caused by the Covid-19 pandemic.

Ms Sturgeon also announced a £62 million energy transition fund to assist the sector in the next five years.

The cash will support projects helping to move towards net-zero emissions.

The First Minister said: “We know that the energy transition will shape our country’s economic future.

“Through these investments, not only will we shape that energy future and economic future, we will also help with the economic recovery from the crisis that is currently afflicting so many businesses across Scotland.”

Scottish Economy Secretary Fiona Hyslop also pushed the UK Government to increase support for businesses – particularly the job retention scheme – as she told the briefing: “If the UK Government continues to reduce support, it is important that there’s continued recognition that public health guidance is devolved and so progress in easing the lockdown may be different in each nation.”

She also announced a £1 million interest-free loan for the Edinburgh Festival Society, who was forced to cancel this year’s events as a result of the pandemic, as well as grants of £149,000 and £100,000 from the Pivotal and Enterprise Resilience Fund and Edinburgh City Council respectively.

The briefing was also updated on the latest coronavirus statistics for Scotland, showing 2,442 patients have now died after testing positive for coronavirus – a rise of three on Thursday.

There are 914 people in hospital with confirmed or suspected Covid-19, a rise of five in 24 hours. Of these patients, 23 were in intensive care – up two.