Baden-Powell statue boarded up after appearing on target list 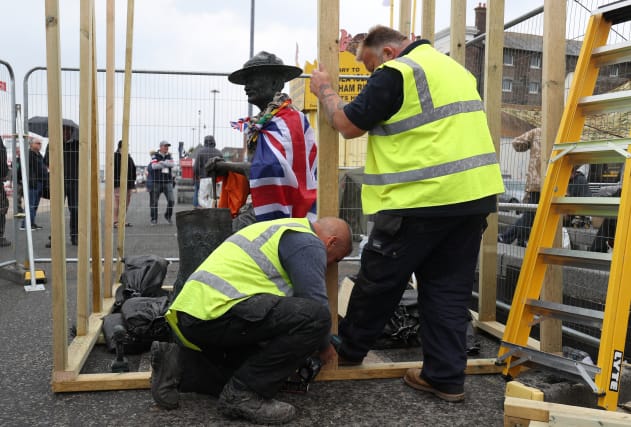 A statue of Robert Baden-Powell that was due to be removed has been boarded up by council workers.

Bournemouth, Christchurch and Poole Council had announced that the statue of the founder of the Scout Movement in Poole Quay, Dorset, would be temporarily taken down after it was put on a target list.

But the removal, due to take place on Thursday, was delayed after a crowd of people – some wearing Scout uniforms – gathered around the statue and vowed to protect it.

More than 36,000 people have signed a petition calling for the statue to remain in place.

Those campaigning for the monument to be removed highlighted Baden-Powell’s associations with the Nazis and the Hitler Youth programme, as well as his actions in the military.

Mark Howell, deputy leader of the council, told the PA news agency on Friday: “The safest thing and most protective thing would be to lift it out and put it into secure storage.

“It has become clear that some people feel that is giving in to protesters and we should just leave it to be vandalised, which is ridiculous because our obligation is to protect it for the future.

“The more valid point that people have been raising is that the council might not put it back in there.

“My assurance is that it would go back but I am not going to be at the council forever.

“So it gives people more security for the long-term future if we board it up.”

Mr Howell said scaffolding panels would be erected around the statue, which overlooks Brownsea Island, where Baden-Powell held his first experimental camp in 1907.

He acknowledged that it would not be “as secure” as placing the monument into storage.

“It is a response by us to concerns that have been widely expressed that people don’t want to see it physically taken out of the ground, so we are trying the best we can to protect it and keep it in situ,” Mr Howell said.

The statue appeared on a target list that emerged following a raft of Black Lives Matter protests, sparked by the death of George Floyd in the US city of Minneapolis last month.

Dorset Police confirmed that it had been “identified as a potential target” but said officers had not advised the council to remove it.

Dan Davies, 37, from Poole, set up his tent next to the statue after hearing about the potential threat.

“I have been camping out like Scouts do – I was a Scout for all the years that I could,” Mr Davies said.

“It is something that is close to my heart. When I saw this happening, I set my tent up and I’ve been here since.

“I don’t think people understand the good of the Scout movement. People are failing to see the goodness.

“It is a risk that it is on the list of statues. We are taking the threat seriously.”

Mr Davies said people at the statue were happy to talk to campaigners who felt it should be removed and “have a conversation”.

“Poole is a tourist town – we are not looking for trouble,” he added.

“We are just doing what we think is right and what we believe in.”

The World Organisation of the Scout Movement (WOSM) said it was following reports about the possible removal of the Baden-Powell statue.

In a statement on Friday, the organisation said Baden-Powell, who was born in 1857, had lived “in a different era with different realities”.

It said the movement he set up more than 113 years ago now has 54 million Scouts in 224 countries and territories.

“Scouting offers an inclusive environment to bring young people of all races, cultures and religions together, and creates opportunities for dialogue about how to promote peace, justice and equality,” the WOSM said.

“The movement that was founded in 1907 on Brownsea Island stands strong in its promotion of diversity and inclusion which are cornerstones of Scouting’s values, while denouncing all forms of racism, discrimination, inequality and injustice.”

It said Scouts across the world attached “historical value and symbolism” to the birthplace of the movement.