Who was Scouts founder Robert Baden-Powell and why is he controversial? 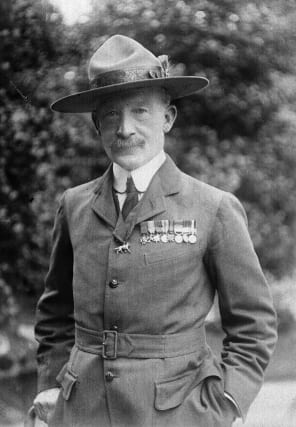 A statue of Scouts founder Robert Baden-Powell is to be temporarily removed from a spot in Dorset amid concerns it could be targeted by protesters as pressure to take down controversial monuments in parts of the UK grows.

Here we look at the history of the man behind the now world-famous Scouting movement and why he might be seen as contentious.

– Who was Robert Baden-Powell?

He was born in London in 1857, the son of an Oxford University professor, and was later awarded a scholarship to Charterhouse School.

It was there and during the summer holidays that he began to pick up skills and crafts as he enjoyed the great outdoors, according to the Scouts website, which described him as a “young adventurer”.

– What did he do after school?

The would-be Scout founder joined the Army, coming second in the entrance exam out of several hundred who applied, and was commissioned into the 13th Hussars, the Scout website notes.

He was a lieutenant general in the British Army in the late 19th century and trained his men with competitions and games to complement traditional Army training.

The highlight of his military career was the defence of the South African town of Mafeking during the Boer War.

Baden-Powell only had a few soldiers and used local boys to help with first aid, carry messages and run errands.

– When did he start the Scouts?

When he returned home from South Africa, he realised boys in the UK could benefit from the same sort of activities as the boys in Mafeking and he organised an experimental camp at Brownsea Island in Poole Harbour, Dorset, in August 1907.

He went on to write his ideas in a book called Scouting For Boys, published in 1908.

The movement got fully under way when boys organised themselves into groups and used Baden-Powell’s ideas in his book as the basis for camps, treks and other activities.

They persuaded adults to become their leaders and Scouting was born, initially for boys over 10 years of age.

He retired from the Army in 1910 to focus on the Scouts.

– Where does the controversy come in?

The Baden-Powell statue in Poole Harbour, Dorset, where the Scout movement was started, had been targeted by campaigners due to his associations with the Nazis and the Hitler Youth programme, as well as his actions in the military.

Bournemouth, Christchurch and Poole Council leader Vikki Slade said: “Whilst famed for the creation of the Scouts, we also recognise that there are some aspects of Robert Baden-Powell’s life that are considered less worthy of commemoration.”

In 2009 documents relating to an inquiry into the conduct of Baden-Powell during the execution of an African chief were sold at auction.

The papers suggest that he had ignored a pledge to spare the life of a leader of the 1896 Matabeleland rebellion.

Baden-Powell, who was tasked with protecting 3,000 farming settlers in what is now Zimbabwe, who had come under attack from rebels hiding in caves, was later cleared by the inquiry.

At the time the papers were sold, auctioneer Chris Albury said: “What is striking is the black and white certainty of British Imperial justice in all this and the Boy’s Own sense of adventure in some of it.

“It seems that Baden-Powell should not have tried and executed prisoners of war and one written statement used in the trial states that Uwini did surrender so was legally a prisoner of war rather than a captive subject to British mercy.

“The character witness statements give a strong sense of the old school tie network banding together and making Baden-Powell a hero rather than a villain.”

In 2010 newly declassified MI5 files revealed that Lord Baden-Powell was invited to meet Adolf Hitler after holding friendly talks with Hartmann Lauterbacher, chief of staff of the Hitler Youth, about forming closer ties with the organisation.

A hand-written note on the MI5 file states: “Lauterbacher’s visit was a success, especially his interviews with Baden-Powell leading to removal on bar on wearing uniforms in Germany for English groups.”

There is no evidence that Baden-Powell’s meeting with Hitler ever took place.

Bars, hairdressers and churches among venues open again in Scotland as lockdown eases