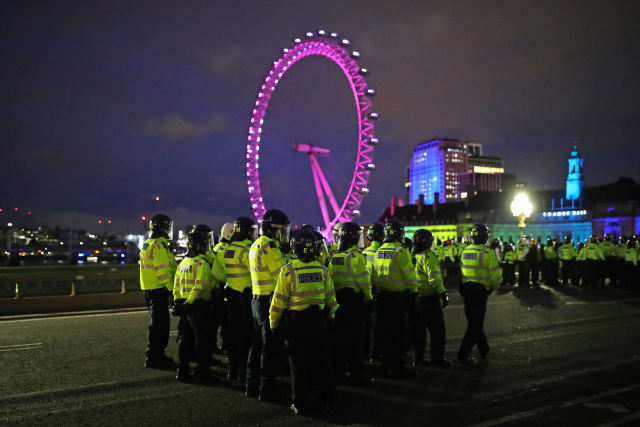 Violent protesters could be jailed within 24 hours, as authorities attempt to deter march trouble, reports have suggested.

Anybody caught vandalising, causing criminal damage or assaulting police officers could be processed through magistrates’ courts with extended opening hours quickly, according to The Times.

The paper suggests that Justice Secretary Robert Buckland and Home Secretary Priti Patel have drawn up the plans based on the response to the 2011 London riots.

Scaffolding and boards were erected around the Cenotaph and Winston Churchill statue in Westminster on Thursday evening, following the monuments being vandalised during previous protests.

After consecutive weekends of BLM demonstrations, far-right group the Democratic Football Lads Alliance has called on supporters to travel to London to protect monuments.

The news comes as the impact of the Black Lives Matter movement continues to be felt across the country with the removal of a string of monuments and statues.

On Thursday evening, a Bristol tower block sign bearing the name of a slave trader was removed is the latest in a string of monuments and statues being pulled down across the country.

On Thursday, Guy’s and St Thomas’ hospitals in London announced it will remove two statues of their namesakes from public view due to their links to the slave trade.

Hours earlier, Colston’s statue was fished out of Bristol harbour after being pulled down and dumped into the water during an anti-racism demonstration on Sunday.

Meanwhile, Bournemouth, Christchurch and Poole Council has delayed plans to temporarily remove a statue of Scouts founder Robert Baden-Powell after angry residents vowed to fight to protect it.

The council had originally said it would move the statue from Poole Quay on Thursday over concerns it was on a target list compiled by anti-racism activists.

Campaigners have focused in on Lord Baden-Powell due to his associations with the Nazis and the Hitler Youth programme, as well as his actions in the military.

The statue features on a “topple the racists” website which lists more than 60 statues and memorials across the UK which they argue should be taken down, because they “celebrate slavery and racism”.

In a statement issued on Thursday afternoon, the council said the listing “placed the much-loved statue at risk of damage or even destruction”.

It added: “We know that local people feel proud of Lord Baden-Powell’s and the Scout movement’s links with Poole, and that some people feel that we would be giving in to the protesters by temporarily removing the statue.

“However, we feel it is responsible to protect it for future generations to enjoy and respect.”

The council said the statue would not be removed because its “foundations are deeper than originally envisaged” with discussions needed with contractors on how to move it safely.

24-hour security will be put in place “until it is either removed or the threat diminishes,” the council said.

Authorities across the country are facing pressure to review contentious monuments following protests over the death of George Floyd and racial injustice.

Mr Floyd died after a white police officer held him down by pressing his knee into his neck for almost nine minutes in Minneapolis on May 25.