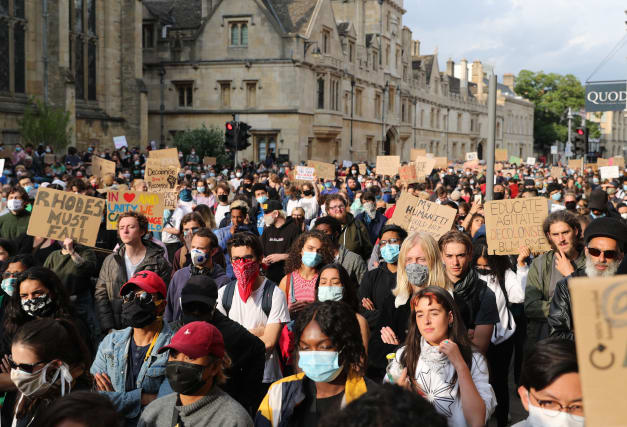 A university vice-chancellor has called for the controversial statue of colonialist Cecil Rhodes to be taken down from an Oxford college.

Baroness Valarie Amos, director of the School of Oriental and African Studies (Soas) in London, questioned why a statue of the imperialist was needed “to have a conversation about history”.

Her comments came after a large demonstration was held outside Oriel College at the University of Oxford as part of a long-running campaign to demand the removal of the Cecil Rhodes statue.

Asked about the movement, Baroness Amos, who will become the first black head of an Oxford college later this year, told BBC Breakfast: “We shouldn’t airbrush history but I don’t think you need a statue of Cecil Rhodes to help you to have a conversation about that history. I would take it down.

“This is a man who was a white supremacist, an imperialist. He founded a company that made money through slave labour in the mines, and you’re telling me that we have to put up a statue of this person, glorify their memory, to have a conversation about our history?”

Her comments came after the vice-chancellor of the University of Oxford said she was “delighted” to see students engage in debate around the Black Lives Matter movement.

Professor Louise Richardson said universities should face questions about who they accept money from, but she described the issues as “complex” and said they are likely to be debated for decades to come.

Prof Richardson said the university has “benefited enormously” from having the Rhodes scholarship – which is a programme, run by the Rhodes Trust, that allows graduates from around the world to study at Oxford.

Earlier this week, governors at Oriel College said the institution “abhors racism and discrimination in all its forms” but that the college continues to “debate and discuss” the presence of the Rhodes statue.

On Tuesday, demonstrators called for the college to remove the statue from the High Street entrance of the building, as well as protesting against racism following the death of George Floyd in the US.

Speaking on the BBC, Baroness Amos, who will become Master of University College in Oxford in August, said: “So many of those young people say they don’t understand, have not been told about that history. They feel an affront, as I do, having to walk past those statues day after day after day.

“Why are we not, as a country, talking about how the slave trade helped us to grow and develop and become an important world power? Why aren’t we talking about that and how that past has informed our present and will inform our future?”

She added: “The Rhodes Trust doesn’t need a statue to do good work. A statue is a memorial. It is a symbol of something. And we say that our country is about values – those are not the values that we should be promoting.”