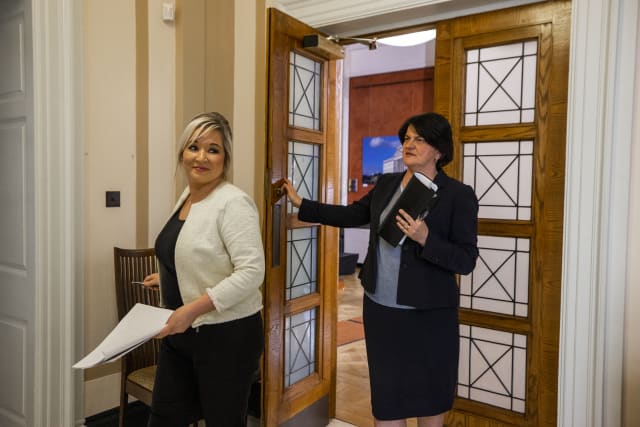 People living alone will be reunited with their families after three months of coronavirus lockdown in a major step towards normality in Northern Ireland.

From June 13, people living on their own will be able to meet with one other household to combat loneliness caused by the restrictions, First Minister Arlene Foster said.

It means an isolated grandparent will be able to see grandchildren again, or partners separated by the pandemic since March can meet up.

And there is no social distancing restriction attached, so a grandparent will be able to hug family members once again.

The measure was one of a raft of rule changes after Stormont ministers met on Thursday.

Mrs Foster said: “We want to minimise the impact of loneliness and isolation on people by enabling people to meet in a controlled and straightforward way.”

She added: “People who live alone can form a small support unit or support bubble with one other house.”

The lifting of the prohibition on one person living alone meeting up with another household indoors was less extensive than that originally envisaged in Stormont’s road map to recovery from the outbreak.

But ministers are set to meet again on Monday to discuss whether they can further relax the restrictions around indoor visits, to allow more family members to reunite.

Thursday’s move followed mounting pressure from people anxious to see their loved ones and a decline in the number of daily deaths from Covid-19 and the rate of spread of the disease.

Deputy First Minister Michelle O’Neill stressed that social distancing limits did not apply to the measure.

“There’s no limitations to it, so it’s not about having to stay socially distanced when you’re visiting, it’s about actually even being able to give each other a hug or whatever makes you comfortable, so that’s why we thought this was an important step forward,” she said.

“But we’re very conscious of the fact that people want more. If the science allows us, then that’s exactly where we will be hopefully next week.”

The First Minister said people could form a “bubble” with another household.

“They can go into that household and stay for as long as they want,” she said.

“They can stay overnight if they want to. There can be physical contact.”

Other steps agreed by the power-sharing devolved Executive on Thursday included:

– The number of people who can meet outside has increased from six to 10.

– All retailers, including those in shopping centres, will be able to reopen from Friday June 12.

Smaller traders had already been planning to roll-up their shutters on Friday and larger outfits like home furniture giant Ikea were already accepting customers, with social distancing measures in place.

– The housing market will fully reopen.

People will be able to view properties again and move home.

– Elite athletes have been given the all-clear to start training again from June 15.

– Childcare centres in places like church halls have been given the green light to begin operating again from June 12.

This will make it easier for parents to return to work but economy minister Diane Dodds has warned that the two-metre social distancing regulation has created serious problems for childcare providers and other businesses.

Stormont ministers decided on Thursday not to change the requirement as science showed two metres provided a greater level of protection against transmission of the virus than one metre.

But Mrs Foster said they would revisit the issue surrounding schools and tourism next week.

Ministers are also next week set to give indicative dates for a range of other sectors to begin reopening.

“Whilst of course we want to open up and get back to normality, we have to say to people as well that we do have to be cautious and take it step by step,” Mrs Foster said.

“It is about the cumulative impact of these relaxations so that we don’t cause this virus to get to the stage where it is transmitting again in the community.”

The death of one further person with coronavirus was announced on Thursday, taking the death toll in the region reported by the Department of Health to 538.

Four new confirmed cases of the virus brought the total since the outbreak began to 4,822 in Northern Ireland.

The current estimate of the R number rate of the virus’ spread was 0.5 – 0.9, enabling the Executive decision to ease some further restrictions, the Department of Health said.

Ms O’Neill explained that it was a rolling process of lifting restrictions.

“This is a stage post to Monday, then Thursday, then it will be an ongoing programme after that,” she said.