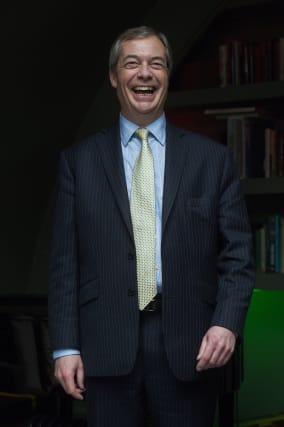 Nigel Farage has left LBC with immediate effect in the wake of controversy over his statements about the Black Lives Matter movement.

The Brexit Party leader had been a regular presenter on the station since January 2017.

Earlier this week he compared Black Lives Matter protesters to the Taliban and said the people who tore down the statue of slave trader Edward Colston were a "violent mob".

On Sunday he tweeted: "A new form of the Taliban was born in the UK today. Unless we get moral leadership quickly our cities won't be worth living in."

He also clashed with Piers Morgan on ITV's Good Morning Britain when he described Colston as a "philanthropist" and said the people who tore down his statue in Bristol were "a far-left Marxist organisation".

In a statement, the broadcaster said: "Nigel Farage's contract with LBC is up very shortly and, following discussions with him, Nigel is stepping down from LBC with immediate effect.

"We thank Nigel for the enormous contribution he has made to LBC and wish him well."

Asked if the decision to step down was related to the controversy surrounding his recent comments, a spokesman for the station declined to comment.

The departure of Mr Farage comes after presenters at radio station Capital Xtra, which shares parent company Global Radio with LBC, criticised Global for its response to Black Lives Matter.

Breakfast show hosts Yinka Bokinni and Shayna Marie Birch-Campbell reportedly said they were "embarrassed" by statements on race issued by the company.

According to The Guardian, the pair wrote a joint statement on an internal discussion board saying: "It's upsetting to receive messages from black people who work in the company who are scared of coming forward and at first we weren't even sure if this was a forum for presenters to share their opinions, but honestly we don't know what else to do."

Mr Farage has courted controversy as a politician and a presenter over the years and his show has sparked multiple Ofcom investigations.

Last year he engaged in a heated clash with a caller over the prospect of the creation of an EU army, asking him: "When will you stop lying?"

Ofcom also assessed comments he made on the show about the refugee crisis, when he referred to Sweden as "the rape capital of Europe".

Mr Farage has been a prominent supporter of Donald Trump and boosted his own profile across the Atlantic during frequent appearances at the Republican's rallies during the last US election campaign.

The pair's friendship was a boon for the radio station when he conducted a half-hour interview with Mr Trump in October last year.

LBC is home to a number of outspoken commentators, including Nick Ferrari, James O'Brien and as of April, the Prime Minister's sister Rachel Johnson.