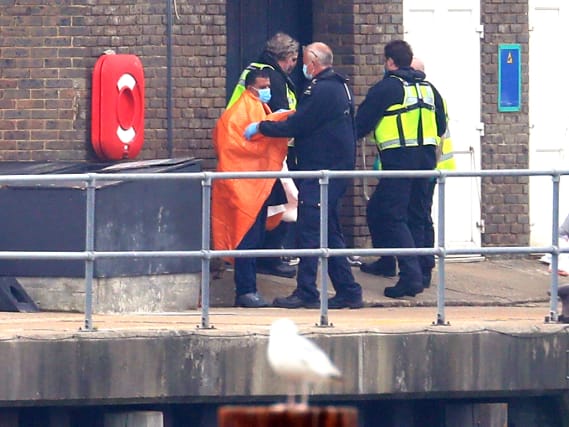 More suspected migrants have been brought to safety in Dover as they continue to cross the English Channel.

A number of individuals wearing life jackets and blankets were seen aboard Border Force cutter Seeker when it arrived at the Kent port on Thursday morning.

They are thought to have crossed the channel aboard up to three small boats.

On the quayside at Dover, migrants in face masks were seen being processed by immigration officials.

The Home Office has yet to confirm the numbers involved in the latest crossings.

On Wednesday, Border Force intercepted three boats carrying 40 migrants and brought them to the UK.

On the French side of the English Channel, four migrants had to be rescued on Wednesday after being spotted aboard a makeshift raft made from two windsurfing boards that had been lashed together.

They had sought to make the perilous journey across the Channel using shovels as oars and were spotted by the Dunkirk Seaways ferry about 3.5 miles off the coast of Calais.

At least 1,480 migrants have crossed to the UK on small boats since the coronavirus lockdown was announced, according to data gathered by the PA news agency.

This is despite the continuing coronavirus crisis and repeated warnings of the dangers of crossing the English Channel in small boats.