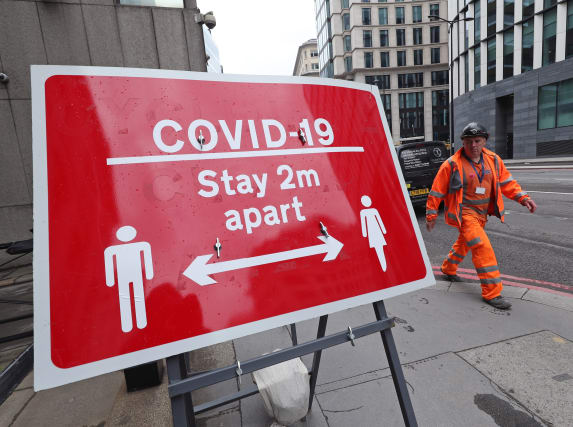 A snap poll by YouGov found that 58% of people want the rules to be kept at the current distance, while just under a quarter (24%) want it dropped to one metre.

Support for the shorter social limit increased with older generations, with 32% of those over 65 preferring the one metre rule, compared to 17% of 18 to 24-year-olds.

Meanwhile, 8% of respondents said the restrictions should be scrapped altogether.

The figures come after suggestions that the Prime Minister may be considering reducing the restriction in an attempt help schools reopen.

The Daily Telegraph reported that Boris Johnson is looking at following World Health Organisation advice and cutting the distance, mirroring guidance already followed by countries including France, Denmark and Singapore.

At Prime Minister’s Questions on Wednesday, he promised to “keep that two-metre rule under constant review”.

Slashing the social distancing restriction could help pubs and restaurants to start up again, and Business Secretary Alok Sharma said this week that “for economic reasons, businesses will want to take a look at this two-metre rule”.

When asked whether there was a hard and fast rule on an effective distance to stop the spread of the virus, one scientist said “it is just a matter of reducing risk with increased physical distance.”

Jonathan Reid, Professor of physical chemistry at the University of Bristol, explained: “Physical distancing is a way of reducing the exposure of an individual to the large droplets generated when someone sneezes, coughs or even speaks.

He added: “The further you stand away from someone, the fewer droplets you will be exposed to when someone sneezes or coughs in your direction. 1m only prevents you from being exposed to the largest of droplets, 2m reduces your exposure but doesn’t make it zero risk.”