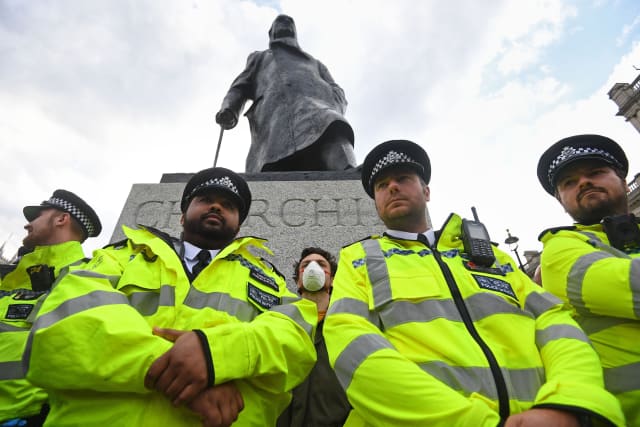 The Mayor of London has pleaded with the public to stay at home to keep safe as anti-racism and far-right groups both plan protests in the capital this weekend.

Sadiq Khan said he is “extremely concerned” that further protests in London, particularly by extreme far-right groups which “advocate hatred and division”, could lead to violence and disorder.

It comes as the Democratic Football Lads Alliance called on supporters to travel to London to protect monuments after a number were vandalised in recent protests.

Mr Khan said: “It is clear that the majority of the protesters have been peaceful. This moment must be a catalyst for systemic, lasting change to tackle the racism and inequalities that black people still face today, in this country and elsewhere.

“However, I’m extremely concerned that further protests in central London not only risk spreading Covid-19, but could lead to disorder, vandalism and violence.

“Extreme far-right groups who advocate hatred and division are planning counter-protests, which means that the risk of disorder is high.

“Be in no doubt these counter-protests are there to provoke violence, and their only goal is to distract and hijack this important issue.

“Staying home and ignoring them is the best response this weekend.”

Last weekend saw demonstrators clash with police in London, while in Bristol a statue of slave trader Edward Colston was pulled down and dumped in the city’s harbour.

Police chiefs have warned that forces will act to stop disorder after 62 officers were injured in protests triggered by the death of George Floyd.

Mr Khan said he is working with the Metropolitan Police and partners to ensure statues and monuments at risk, including the Cenotaph, Winston Churchill and Nelson Mandela, are covered and protected.

He warned that there have been confirmed new cases of coronavirus among protesters around the world, adding: “I fear we will see the same here.”