How the Queen has embraced technology over the years 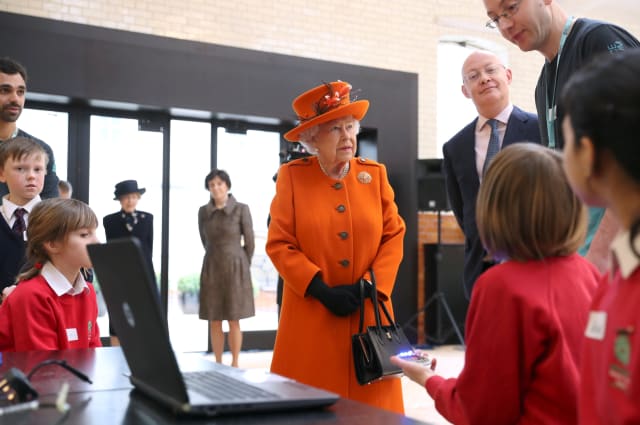 The Queen’s life has been steeped in tradition, but she has kept up with the vast technological advances during her reign of nearly 70 years.

In a royal first, the 94-year-old has taken part in her first ever official video conference call as part of her public duties, following in the footsteps of other royals as engagements have gone online during the coronavirus pandemic.

In her first televised Christmas broadcast in 1957, she spoke of the “speed at which things change around us”.

The grainy black and white picture of a young Elizabeth, dressed in a shimmering gown with a string of pearls around her neck, epitomised a significant step for the royal family.

It was one of the first strides taken by the monarch to ensure she was up to date with her ever-changing nation.

The Queen has seen the advent of colour television, mobile phones, the internet and social media.

Under her command, television cameras were allowed inside Westminster Abbey for the first time to film her coronation, although she had initial reservations.

Five years later, the Queen made the first ever trunk call in the United Kingdom.

Speaking from Bristol, she called the Lord Provost of Edinburgh 300 miles away.

When email technology was in its infancy, the Queen became the first monarch to send one of the electronic messages in 1976 during a visit to an Army base.

But the Queen continued to stick with traditional methods of communication such as letters and telegrams.

Her own website, which began as www.royal.gov.uk, was set up in 1997 during a visit to Kingsbury High School in Brent, north west London.

However, it was reported that the Queen took some time to acquaint herself with certain devices.

In 2005, she is said to have told Bill Gates, the founder of Microsoft, that she had not yet used a computer.

She later ensured that her household had embraced the internet and other major advances.

The Queen is said to have had a BlackBerry in the past which she used to check her emails on the move – on the advice of her most technically savvy son, the Duke of York.

Her grandchildren have helped in keeping her up to date with the latest technological trends.

Princesses Beatrice and Eugenie explained the concept of video sharing on YouTube before the British monarchy launched its own channel on the site in 2007.

In 2006, her annual Christmas address was also sent as a podcast for the first time.

She personally uploaded a video onto YouTube during a visit to the Google offices in London in 2008.

In 2009, she sent an email to 23 young people from across the world who wrote blogs about their lives and their experiences of the Commonwealth – which was celebrating its 60th anniversary.

She has also owned a number of iPods – one reportedly given to her as a gift by then US president Barack Obama and another from the Duke of Cambridge – which were said to contain classical music, including the Last Night Of The Proms.

But the impact of changing technology has not always welcomed by the monarch.

She reportedly said she found it strange to be greeted by a sea of mobiles when out on engagements as members of the public attempted to take her picture on their camera phones.

The Queen also voiced her concerns that children were being attracted to computer games and e-books.

Author Joanne Harris said after attending an investiture: “She asked me what I thought about e-books and computer games and said that she feared that children were playing with those more than they were reading books.”

In October 2014, the Queen passed a new technological milestone when she sent her first tweet – to mark the opening of a new Science Museum gallery.

It read: “It is a pleasure to open the Information Age exhibition today at the @ScienceMuseum and I hope people will enjoy visiting. Elizabeth R.”

The message was retweeted more than 40,000 times.

But, in keeping with one of the downsides of social media, it also attracted instant abuse from Twitter trolls.

“We saw some tweets with profanity but that is just the nature of the format,” a Buckingham Palace spokesman acknowledged.

The monarch also tweeted her thanks for all the “digital messages of goodwill” she received to mark her official 90th birthday in 2016 – again signing off as Elizabeth R.

In 2019, she shared images on Instagram for the first time, also at the Science Museum.

Touching an iPad screen, she posted photos on the official royal family account of a letter from 19th century inventor and mathematician Charles Babbage to Prince Albert.