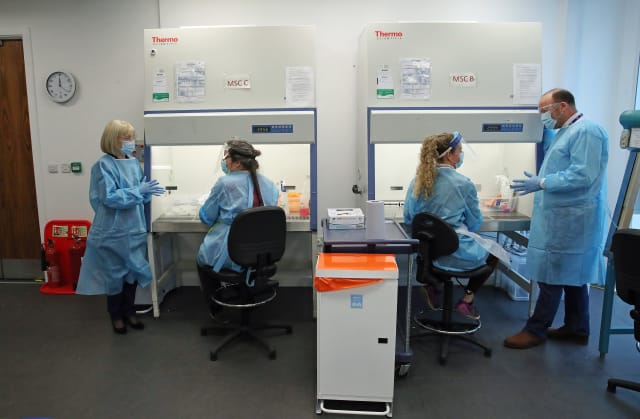 One of the UK’s three sites launched to rapidly expand testing capacity has processed more than 200,000 test samples since opening.

The Glasgow Lighthouse Lab is hosted by the University of Glasgow at its Queen Elizabeth University Hospital campus and officially began testing in April.

It receives samples – at first only from key workers but later extended to the general public – collected at regional testing sites around the UK.

She said: “This is a significant milestone, and one which highlights the importance of having the Lighthouse Labs supporting the national Covid-19 testing effort, alongside NHS testing facilities, in Scotland and across the UK.

“It has been said all over the world, and confirmed by the WHO, that we have to test, test and test some more to fight the virus that has killed so many people.

“And as testing is now an essential part of the UK and Scottish Government’s response plans to ease lockdown restrictions, the University of Glasgow and the whole team at the Glasgow Lighthouse Lab remain committed to maintaining this large-scale testing facility in Scotland for the benefit of all for as long as it is needed.”

She added: “For that reason, I remain incredibly grateful to all the partners and colleagues who have volunteered their time, expertise and skills for this facility.

“As a result of their continued commitment and willingness to help in a time of need, we have not only hit important milestones such as more than 200,000 tests but we have created a facility which will be able to process Covid-19 tests for as long as we need to in this pandemic.”

The Glasgow lab is part of a network of diagnostic testing facilities alongside other Lighthouse sites in Milton Keynes, Buckinghamshire, and Alderley Park, Cheshire, with the project funded by the UK Government.

The Clinical Innovation Zone at the hospital helped create what Prof Dominiczak calls a “triple helix” approach including research, industry and the NHS.

She said: “These are the most unprecedented circumstances any of us working in medical science have ever known and as a doctor and a scientist I feel passionately that we must take our experience and expertise and use them now to focus on Covid-19 and do all that we can to help.”

She added: “That is what drove us to focus our energy into establishing the Glasgow Lighthouse Lab, and it is that passion that we will use to keep the project going for as long as it is needed.

“The ability to translate cutting-edge science into real world patient care is a vital part of precision medicine – an area of science I am very passionate about, and one which the University of Glasgow and Scotland are world-leaders in.

“I am enormously proud that we in Glasgow have been able to translate both our precision medicine and scientific expertise to focus on Covid-19 work, in order to play our part in offering help at this time.”