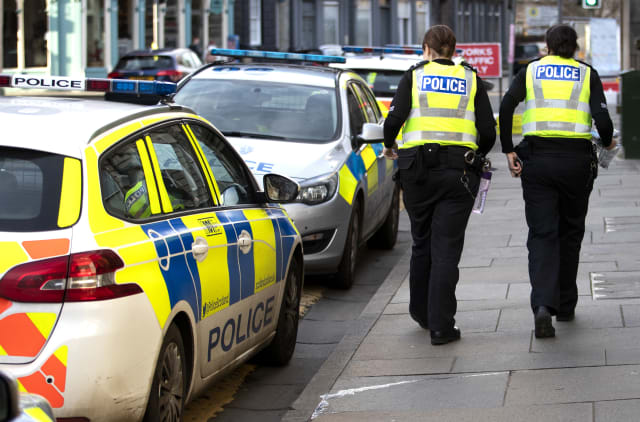 A senior police leader has said it has become “almost like a hobby” to video attacks on officers after four people were arrested over an assault in east London.

Home Secretary Priti Patel has condemned the incident in Hackney, which saw two Scotland Yard officers set upon after they stopped to help an apparent assault victim.

Footage posted online shows a male officer pinned down on the ground and being kicked, while his female colleague is pushed when she tries to intervene.

Several men, including one with a baseball bat, surround them swearing, shouting and filming on their phones, with one even dancing a jig and taking a selfie during the assault.

John Apter, the national chairman of the Police Federation, described the attack as “truly stomach churning”.

“It was horrific to watch because you didn’t know what was going to come next,” he told the BBC.

“That’s 85 police officers a day, every single day, being assaulted.

“And many of them are videoed. It’s almost like a hobby for some now to video an attack on a police officer and put it on social media.

“Not to assist an investigation, but to mock my colleagues and to, almost, encourage violence against them.”

Both officers suffered minor injuries in the incident, in Frampton Park Road, at around 3.30pm on Wednesday, Scotland Yard said.

Detective Chief Superintendent Marcus Barnett said four people – including two men, aged 20 and 38 – had now been arrested over the assault.

He said: “Two of my officers were horrifically attacked having tried to undertake a very lawful and necessary arrest on the streets.

“Fortunately both the officers are well, cuts and bruises and obviously shocked, as are all their colleagues and I.”

A witness, who gave his name as Mukir, 38, told the PA news agency the scene looked like a “mad street fight”.

“I was up the road a bit walking home when I saw these fellas surrounding a man on the floor, some of them were kicking and hitting him from what I could see.

“There was a woman shouting at them,” he said.

“I thought at the time that it was some kind of mad street fight, I didn’t know it was the police, so I didn’t really take any notice until I saw it later on Facebook.

“I’m not really surprised by it, I know some people think badly of the police in this area and since the whole Black Lives Matter movement it’s quite dangerous for them.”

“My thoughts are with the outstanding @metpoliceuk officers who were subject to this disgusting violent attack.”

Superintendent Martin Rolston said: “This incident, which was captured on someone’s mobile phone is truly shocking.

“My officers went to the assistance of a member of the public, who asked for their help, after stating that they had been assaulted.

“What happened next is a reminder of the risks our officers take whilst going about their duties.

“It is fortunate that their injuries are not more serious.

“There is no place for this level of violence on our streets.

“These brave officers were doing their duty and assisting the public.

“We owe them a debt of gratitude and I wish them a full and speedy recovery.

“Attacks on our police will not be tolerated.

“I urge anyone with information to come forward to ensure the perpetrators of this disgusting attack feel the full force of the law.