Zoos prepare to reopen to visitors in latest lockdown easing 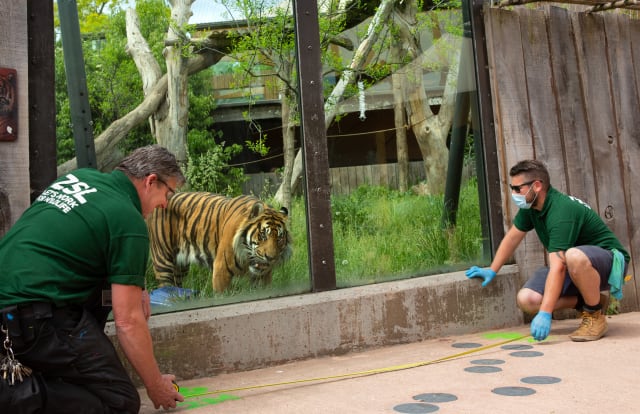 Zoos and safari parks are getting ready to welcome visitors after they were given the green light to open their doors from June 15 in the latest lockdown easing.

Leading zoos including London, Chester and Whipsnade, as well as smaller attractions, had warned the Government they faced permanent closure if they were not allowed to reopen soon to visitors who provide their income.

It would not just affect the zoos themselves but the conservation work they do around the world, the attractions said.

Though the Prime Minister is announcing on Wednesday an easing of restrictions for zoos, they must not reopen indoor exhibitions, such as reptile houses, and must ensure amenities including cafes are takeaway only.

The sector is warning it still needs Government support due to the loss of revenue from venues being closed since late March.

London and Whipsnade Zoos have been preparing for reopening with social-distancing measures including strictly limited capacity, one-way routes, new signage, and increased hand-washing facilities to make the venues safe for visitors.

Dominic Jermey, director general of the Zoological Society of London (ZSL) which runs London and Whipsnade Zoos, said they were “raring to go”.

“We expect to have tickets ready to book by Friday – and everyone will need to book so we can manage capacity. We hope the support we’ve seen so far for our zoos translates to visitors coming in to support us further.”

Jamie Christon, chief operating officer at Chester Zoo, said: “A week ago we were in despair, not knowing when we would reopen, or if we could even survive if our gates had to remain closed for much longer.”

He thanked the public and MPs for their support and the Government for allowing them to reopen.

“This isn’t over just yet though. There’s no denying that the zoo has suffered severe financial damage over the past three months and the road to recovery will be long and uncertain.

“However, we now start the process of rebuilding this great charity zoo, as we prepare to safely welcome back visitors through our gates – albeit in much, much fewer numbers – from Monday June 15.

“We are in no doubt that this is why now, today on the 89th birthday of Chester Zoo, we have hope that we will survive.”

Claudia Roberts, managing director of the Zoological Society of East Anglia (ZSEA) which runs Banham Zoo in Norfolk and Africa Alive in Suffolk, said it was hoped both facilities would reopen on July 1, following a deep clean.

Dr Christoph Schwitzer, chairman of the British and Irish Association of Zoos and Aquariums (Biaza), said the organisation was “not under any illusions of the challenges we still face”.

“Many of our members, including aquariums and tropical houses are not able to open and members in other nations remain under lockdown.”

“We will continue to make our case across the nations as well as pushing for urgent financial aid to be made available from governments. We are not out of the woods yet.”