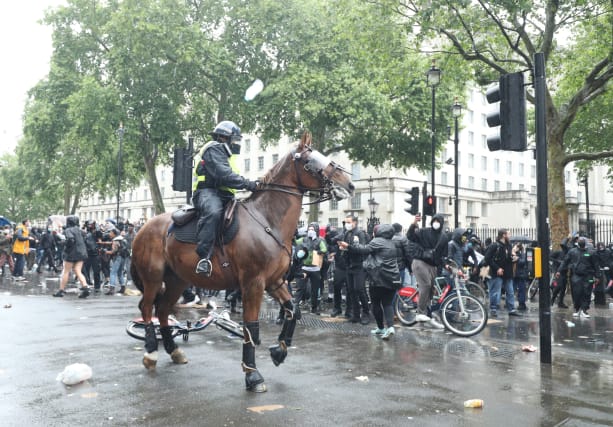 A woman who was hit by a police horse at a Black Lives Matter protest on Saturday said she was “shocked” by the police response to the incident.

Mounted police were brought in to control the largely peaceful protest, which was attended by thousands in London.

However, after an officer was knocked from her horse after riding into a traffic light, the animal ran on to the street in Whitehall, knocking down nursing student Jessie Tieti Mawutu in an incident which she said left her “traumatised”.

Ms Mawutu, 19, told the PA news agency that local authorities could not process her complaint about the incident, which has now been referred to the Independent Office for Police Conduct.

Ms Mawutu said that she called 101 after the incident, which she claims has left her with “non-stop headaches”, and was referred to a local police department.

“The officer said that this was a complaint that he could not process as it was a protest that had resulted to violence leading the horse to react in such a way,” she told PA.

“Shocked to his response, I had begun to explain that the protest was peaceful throughout the day and that when I had walked off from the protest to go home, it was still peaceful.

“He then said that if the protesters were peaceful in the first place then action would have never been taken by the police.”

Ms Mawutu said she was hit by the police horse as she was going home from the protest in central London.

She told PA: “We saw around six or seven police vans drive past us with sirens on and start to see protesters starting to run towards us.

“The next thing I knew I was hit by something heavy that pushed me to the ground with full force and rolled me a few times on the ground.

“I open my eyes to see my younger sister, shaking me, crying over me, and many other protesters around me asking if I was OK, if I could see them, if I could hear them.

“They explained that I had just been hit and trampled on by a horse.

“Injuries from the scene were grazes and a headache. After a few days, bruises have appeared, the whole right side of my body has become stiff and painful and I have been experiencing non-stop headaches.”

Ms Mawutu has started a petition aiming to have her case investigated by the Met Police.

“I am hoping that this petition is noticed by the relevant authorities who can assist me with getting this incident resolved and handled in the correct and respectful way,” she said.

“I would indeed appreciate an apology as well as action taking place to prevent this, or anything for that matter, from happening to anyone else who is simply protesting for change and peace in the community.”

The Met Police said in a statement it was reviewing the incident.

It said: “The rider fell from the horse whilst policing the ongoing demonstrations and sustained serious injuries. The horse, which was uninjured, made its way back to the nearby stables.

“The officer remains in hospital in a stable condition. The full circumstances of exactly what happened are currently being reviewed.

“As of 9 June no official complaint has been received, but the Met’s Directorate of Professional Standards will be directly contacting the member of public involved to ensure their account is acknowledged and processed in the correct manner.”