What was Britain’s involvement in the slave trade? 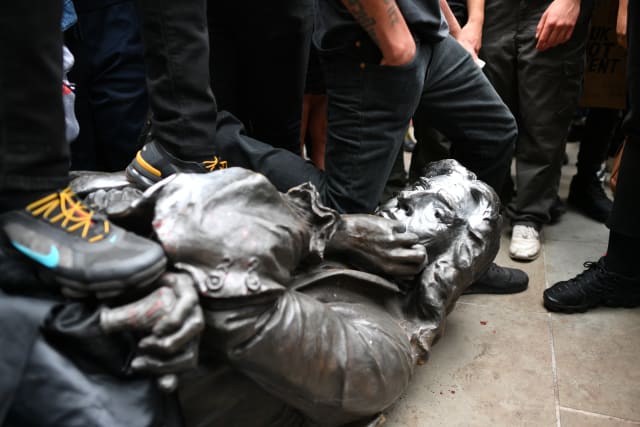 A cultural revolution sweeping the UK is seeing more people learn and acknowledge Britain’s history in the slave trade.

As the Black Lives Matter movement grows, so too does the call for more awareness on the UK’s involvement in forcing millions of African people into slavery over hundreds of years.

Here is what you need to know about Britain’s involvement in, and the main advocates of, the slave trade:

– What was the slave trade?

Traders from Britain, Europe and Africa moved millions of people from west Africa in the transatlantic slave trade, which became known as the “middle passage”, being the middle leg of a three-part journey between Europe, Africa and the Americas.

Traders would export manufactured goods to west Africa where they would be exchanged for slaves from African merchants.

The enslaved people were sent across the Atlantic and sold for huge profits in the Americas, where they worked the plantations, producing raw materials such as sugar, rum, tobacco and cotton, which were shipped to Europe.

– When did it take place?

From the mid-15th century, for more than four hundred years, Europeans enslaved millions of Africans.

Between 1501 and 1866, it is believed more than 12 million people were put onto slave ships, with millions thought to have died en route.

Hundreds of slaves were shackled together and packed into the cramped decks of slaving ships in inhumane conditions. Some 10 to 20% are estimated to have died on the journey.

Plantation life for slaves involved back-breaking work with poor diet and conditions. Many did not live to middle age. They were branded, whipped and executed for trying to run away.

– What was Britain’s role?

Britain’s involvement in the slave trade spanned more than two centuries, with the first slaving expedition led by John Hawkins in 1562, and the first Africans introduced to colonial America in 1619.

Spain and Portugal originally dominated the trade but by the 18th century Britain had become the most important slave-trading nation in the world.

It is estimated that Britain transported more than three million Africans to the British colonies, many of whom died on the way.

– What cities were slaves imported from?

The slave trade was carried out from many British ports and British ships made about 11,000 slaving voyages. Of those, Liverpool, London and Bristol were responsible for 95%, while Glasgow was also a major trading port.

It brought great wealth to the cities, who have streets, squares and monuments honouring those involved in the trade.

In the 1760s, concern about the slave trade and the treatment of the African people started to become a social issue.

William Wilberforce and Thomas Clarkson were among the leading voices of the abolition movement, with Wilberforce introducing the first abolition bill before Parliament in 1789.

After many defeated bills, the 1807 Abolition of the Slave Trade Act finally outlawed the slave trade throughout the British Empire and made it illegal for British ships to be involved in the trade.

It was not until 1833 that slavery itself was banned throughout the British Empire, and 1838 before slaves in British territories gained their freedom.

– Who were notable slave traders and owners?

He is remembered for building ships that withstood the Spanish Armada, but before that, in 1562, John Hawkins set out on a voyage that marked the beginning of the English slave trade.

Hawkins, who has a square named after him in Plymouth, captured 300 Africans in Sierra Leone and transported them to Spanish plantations in the Americas, where they were traded for pearls, hides and sugar.

His expedition proved so profitable that Queen Elizabeth I provided him with money and ships for his subsequent journeys and gave him a unique coat of arms bearing a bound slave.

His expeditions to Sierra Leone between 1564 and 1569 saw 1,200 Africans captured and shipped across the Atlantic.

John Gladstone was one of the largest slaves owners in the British West Indies, and his son William Gladstone, whose statue stands in Hawarden, Wales, at the library named after him, served as British Prime Minister for 12 years.

The Scottish merchant made a fortune as a Demerara sugar-planter and had hundreds of enslaved people working in plantations in the decade before emancipation.

After slavery was abolished in 1833, he received the largest compensation payment made by the Slave Compensation Commission – around £93,000, the modern equivalent of about £10 million.

In 1680, Edward Colston became a member of the Royal African Company (RAC) which traded gold, ivory and enslaved Africans.

Colston, whose statue in Bristol was thrown into the River Avon by protesters on the weekend, became the company’s deputy governor and amassed a huge fortune from the slave trade.

Between 1680 and 1692, at least 84,500 enslaved African men, women and children were purchased, branded and forced onto RAC ships, of which nearly 19,300 died on the transatlantic crossing.

The two-time Lord Mayor of London, born in 1709, was the son of one of the wealthiest sugar planters in Jamaica, Peter Beckford, who owned more than 22,000 acres of land with plantations worked by enslaved people.

Beckford – who has a statue inside London’s Guildhall – and his family became one of the largest landowners in the West Indies, with more than 2,000 enslaved Africans working on their plantations.