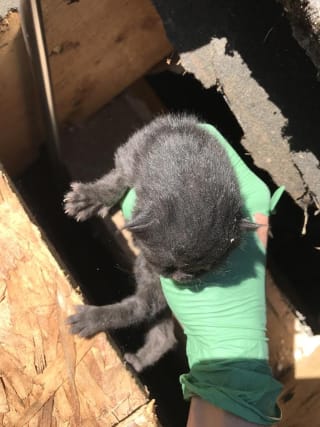 A young kitten who fell through a wall has been rescued and reunited with his mum, while video conference calls could become more interesting thanks to a herd of alpacas.

Here are some of the more uplifting stories you might have missed.

A two-week-old kitten has been rescued after its meowing was heard through the cavity wall of a garage.

The animal could be heard crying through the wall of the property in Warrington, Cheshire, after falling through a gap from the loft space, where its semi-feral family had been living.

The garage owner called the RSPCA and animal collection officer Lauren Bradshaw was able to pull the kitten to safety through the roof.

She said: “He was a little dusty, hungry and thirsty but otherwise unharmed and doing OK. We reunited him with his three other siblings who were living in the garage.”

The RSPCA subsequently found the kitten’s mother and reunited her with them.

People working from home can now pay to have an alpaca join their team meeting, raising money for end-of-life charity Marie Curie.

With lockdown in its eleventh week, many people are still working from home and having to take part in virtual team meetings.

Businesses can now help raise urgently needed funds for Marie Curie by inviting Bob Crosbie from Bobcat Alpacas in Edinburgh to host a 20-minute “meet and greet” with his herd, in return for a suggested donation of £100.

Drone footage has captured what is believed to be the largest migration of green turtles on film, with 64,000 spotted near Raine Island on Australia’s Great Barrier Reef.

Researchers at Raine Island have used the images, filmed in December, to conduct population surveys of the turtles as they wait to come ashore and lay clutches of eggs.

The scientists had been investigating different methods of research at the world’s largest green turtle nesting site.

An angry cat was saved by a lifeboat crew after it became trapped by rising water on the Thames, but not before it put up a fight against its rescuers.

The crew had spotted the black cat in distress on the rapidly diminishing patch of shingle next to a six metre-high river wall, so launched a boat to save it.

The black cat hissed and snarled before trying to scale the sheer wall, and even wriggled out of the clutches of RNLI crewman Mark Pusey – who eventually managed to wrap it in a blanket and take it ashore.

Mr Pusey said: “This incident had a good outcome but does show how easily the fast-flowing tides can turn a benign environment into a very dangerous one.”