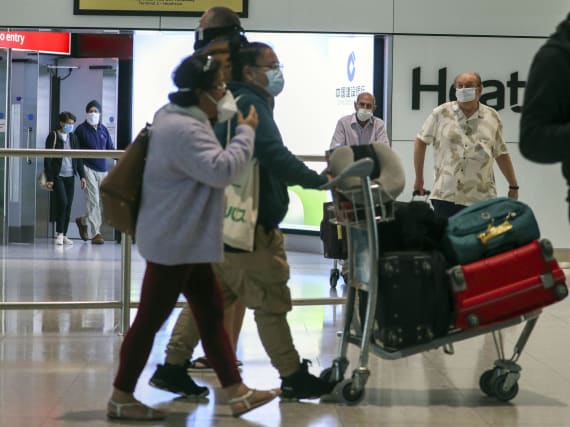 Tougher border controls would have been more effective in the UK if they had been introduced earlier during the coronavirus pandemic, according to public health experts.

Specialists from around the world also told MPs they recommended against Britons going on holiday abroad this summer as part of efforts to contain the outbreak.

Sir David Skegg, a professor of epidemiology at the University of Otago in New Zealand, said imposing border controls and mandatory 14-day self-isolation in the UK – which were made law on Monday – would have been “much more effective” if imposed in February but “it may still be worth doing now”.

He told members of the Commons Home Affairs Committee: “These border measures would be most effective if they were done very early.

“The earlier the better. But as I say, I think it would have been much more effective if you had done this in February, but it may still be worth doing now.

“It all depends what the strategy is and that’s not clear to me.”

Earlier this week New Zealand said it had eradicated coronavirus after health officials reported that the final person known to have been infected had recovered.

Sir David said the country had been “heading in the same direction” as the UK but added: “I think it’s fortunate our government did take early decisive action.”

He told the committee if the pandemic had taught everyone “one thing”, it was that “acting early is absolutely vital”, adding: “When you are dealing with a virus that spreads exponentially, every day counts.

“With the wisdom of hindsight, the delays in imposing border restrictions, but even more so in ramping up testing and contact tracing and imposing a lockdown, really help to explain the situation that the UK is in today.”

Sir David said it is “not clear to me what the UK strategy is for dealing with this disease”, adding that it did not seem to be “very logical” to impose a 14-day quarantine on people coming to the UK from countries with a much lower incidence and prevalence of Covid-19.

Professor Gabriel Leung, dean of medicine at the University of Hong Kong, said the answer was “really obvious”, adding: “If you look around the world, the places that have imposed border restrictions earlier on, have tended to come out much better in terms of the local outbreaks.

“If you had imposed border restrictions earlier on, then perhaps that picture would have looked quite different.”

Professor James Wilsdon, vice-chairman of the International Network for Government Science Advice, said: “Clearly this is one of the number of areas with the benefit of hindsight we perhaps wish we had moved faster.”

None of the experts thought going on holiday abroad was a good idea when asked whether the tourist industry in Europe could function in some form this summer.

Professor Teo Yik Ying, dean of the school of public health at the National University of Singapore, said: “No, it does not sound like a good idea.”

Professor Leung said it would be “premature” for mass market tourism to take place and, although he was not sure it would be “an absolutely dire situation”, added: “I wouldn’t recommend it.”

Sir David said: “I wouldn’t recommend it either. I can understand why people want to go on holiday.

“A lot of people wish 2020 hadn’t happened but the fact is this virus is still with us and this year is going to be different from other years.

“I can’t see mass tourism being a good option at the moment.”

All of the experts agreed that it was not too late to be worth introducing border restrictions now.