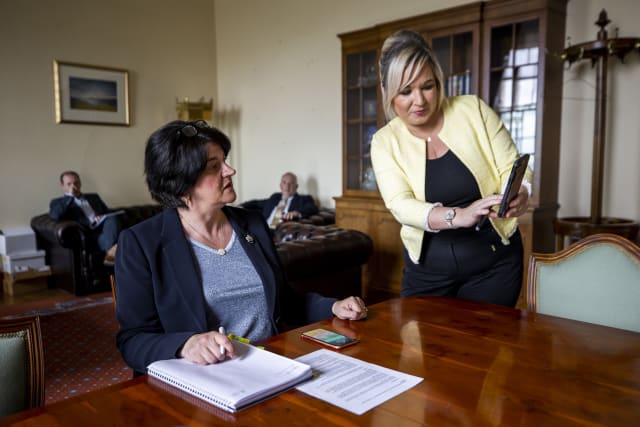 Stormont ministers are to meet later to discuss changes to coronavirus restrictions.

Publicans are also pressing for speedy reopening to keep up with counterparts in the Irish Republic.

The Executive is keen to explore the concept of people meeting in social “bubbles” which has helped New Zealand lift almost all Covid-19-related restrictions and declare the country virus-free.

Groups of up to six are able to gather outdoors in Northern Ireland but not indoors due to increased risk of spread of the virus inside.

Prime Minister Boris Johnson has said people living alone in England will, from Saturday, be able to stay at one other household in a “support bubble”.

The relaxation does not apply to Northern Ireland.

The wearing of face coverings on public transport and in supermarkets, the subject of widespread public debate, has been previously discussed by the Executive.

Wearing coverings could affect people’s commitment to social distancing and create a false sense of security, Mrs Foster has said.

The latest update on where the rate of spread of infection – known as the R number – is sitting is expected to be published later on Thursday and will help inform ministers’ deliberations on further unwinding lockdown.

If the reproduction number remains below one per patient, that gives scope for relaxations.

The impact of anti-racism mass protests in Belfast and people flooding to beaches during recent good weather, if they affect the R number, will take time to filter through to the official figures.

On Wednesday, Stormont’s finance minister moved to clarify a claim that the coronavirus lockdown could have been avoided if the UK Government had better funded the NHS.

Controversy flared over Conor Murphy’s remarks about “Tory austerity” as Northern Ireland reported no new coronavirus deaths for a fourth day in a row.