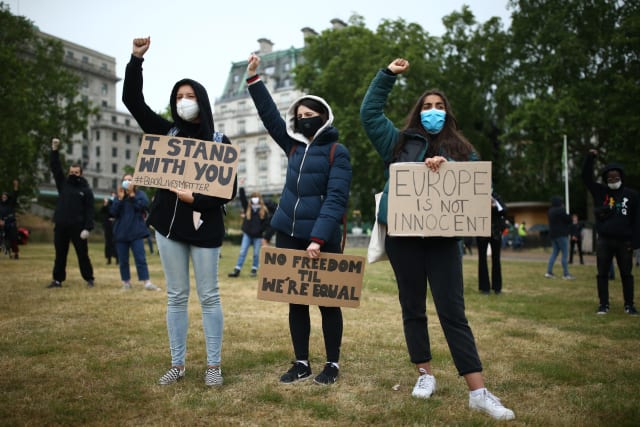 Around 60 protesters wearing face coverings walked from Green Park to Trafalgar Square on Wednesday, partly to condemn the violence which erupted at some of the protests last week.

This comes ahead of planned racial justice demonstrations as well as counter-demonstrations by far-right group Football Lads Alliance this weekend.

Imarn Ayton, 29, from the group Justice For Black Lives, said the fact supporters had turned up despite the weather showed their “genuine commitment” to the cause.

She said: “I am not here for vandalism, I am not here to tear down statues, because that does not help black people.

“Don’t get me wrong, I want those statues down.

“But shouting at Boris Johnson outside Downing Street does not help black people.

Ms Ayton, who described herself as a “full-time activist,” added that the movement should be about “more than social media”.

She said: “It isn’t to do with your black box on Instagram, it’s about saying this movement isn’t going away.”

Another protester, Elen Ekpaloba, 23, said the tearing down of Edward Colston’s statue in Bristol “was power to the people”, but urged followers to pursue a more peaceful direction to enable “the start of a revolution”.

“That’s why they (Football Lads Alliance) are coming out on Saturday, why they want to fearmonger, and make us feel inferior.

Protesters said they would be staging another demonstration in Hyde Park, central London, on Friday, and were drafting a list of demands for the Government.