Queen reveals her favourite horses of all time 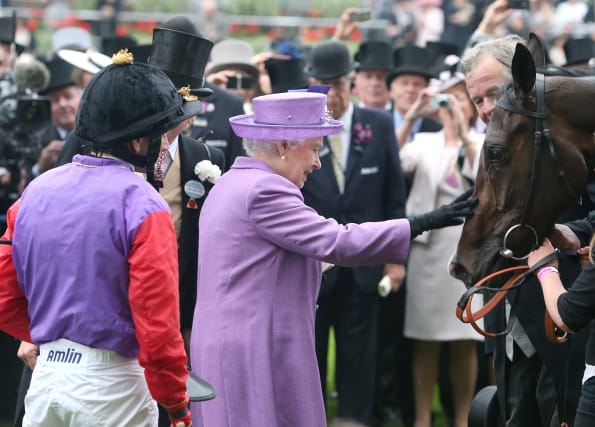 The Queen has revealed her favourite horses from the seven decades of her reign for the first time.

The monarch picked out her most-loved steeds for Horse & Hound magazine, showing a deep personal connection to each one.

Her choices include tributes to the memory of her late father George VI with Aureole which she inherited from the King, and the moment when her daughter Princess Anne won the European Eventing Championships on Doublet – a horse bred by the Queen.

She also chose the racehorse Estimate which triumphed in the Ascot Gold Cup, making her the first monarch to win the trophy.

Others included Burmese, the mare she rode at Trooping the Colour for 18 years, her trusty fell pony Emma, and Sanction with whom the monarch had an “almost telepathic” bond.

The Queen selected eight special horses that she and her family have loved riding and watching, plus five of the most memorable racehorses of all time that she has bred and owned.

The Queen’s stud groom and manager at Windsor Castle, Terry Pendry, and John Warren, the Queen’s bloodstock and racing adviser, provided insights into her choices, in consultation with the Queen.

Mr Pendry paid tribute to the equestrian mastery of the monarch, who has bred racehorses, carriage horses, hunters, sports and riding horses, and polo ponies.

“Her knowledge and expertise is well known. She names all of her horses and ponies herself and can remember the parentage of every single one,” he said.

“She still rides to this very day, and it is an important part of her life. Her Majesty has a fountain of knowledge in all things equine, you might say a living encyclopaedia.”

Mr Warren heralded the Queen’s patience as he told how she has continued to work on her understanding of equestrian matters over the decades.

“Her Majesty has developed a deep, profound knowledge, which she has consistently worked on and thought about throughout most of her life,” he said.

“It takes the same sort of precise expertise as a watchmaker to produce a somewhat fragile racehorse to perform on the big occasions and indeed any occasion at all – especially when they are expected to race at speeds of up to 40mph.

“These incredibly highly charged creatures, full of blood and muscle, are developed from birth with kid gloves and the sophisticated jigsaw of trying to put all the pieces together is a constant challenge that continues to intrigue the Queen.

“To deal with the constant challenges and disappointments, as all horse people will know, the greatest asset you need to have with horses is patience – which luckily the Queen has in spades.”

The Queen has long been known for her love of horses.

She had her first riding lesson at the age of three, and now, at 94, was recently pictured on one of her fell ponies at Windsor while in lockdown.

Here are the Queen’s favourite horses:

Mr Pendry said: “Betsy was full of character and spirit and much loved by the Queen.”

2.  Burmese – Burmese was presented to Her Majesty in 1969 by The Royal Canadian Mounted Police, and the Queen rode the mare in Trooping the Colour for 18 years.

3. Doublet – Bred as a polo pony, it was the horse Princess Anne won the European Eventing Championships with at Burghley in 1971.

Mr Pendry said: “The Queen bred both the horse and the rider!”

4. Columbus – This horse was sired by Colonist, Winston Churchill’s stallion.

Anne first evented Columbus at novice and intermediate level but found him too strong. He was also a favourite of Captain Mark Phillips and won Badminton in 1974.

Mr Pendry said: “Queen Elizabeth The Queen Mother always said he was the Grand National horse that never was. She would have loved him for herself.”

5. Sanction – Sanction was a brown riding horse and a firm favourite for many years.

“Sanction was almost telepathic and had a very strong bond with Her Majesty… Sanction was the last home-bred horse that Her Majesty rode before making the decision to start riding native ponies. A little closer to the ground, so to speak,” Mr Pendry revealed.

6. Balmoral Jingle – The Highland pony was a huge success in the show ring and eventually went on to become a broodmare at the Balmoral Stud.

7. Balmoral Curlew – Another favourite of the Highland ponies who was also a key show ring performer and became a broodmare.

8. Emma the Fell pony – “A wonderful servant to Her Majesty and is still going strong at the age of 24 as one of the Queen’s riding ponies,” Mr Pendry said.

1. Aureole – Aureole was bred by George VI and was the first horse the Queen inherited from her late father.

Mr Warren said the memorable horse was the Queen’s first top-class exciting racehorse, and although the animal was feisty and highly strung, the Queen knew how to get the best out of him.

2. Doutelle – The Chestnut stallion won many races for the Queen.

He retired to the Sandringham Stud but his career was cut short, dying at the age of only eight.

3. Highclere – Another all-time favourite was Highclere, a Dual Classic winner, who was ridden to victory in both the 1000 Guineas and Prix de Diane in Paris,

In Paris, an enormous, delighted crowd chanted “Vive La Reine” after the win.

Mr Warren said: “This remarkable mare will inevitably continue to be at the core of the Royal Studs’ broodmare band for future generations to enjoy and nurture.”

He added: “It gave Her Majesty great pleasure in achieving an ambition to breed such a great horse of true stamina and grit.”