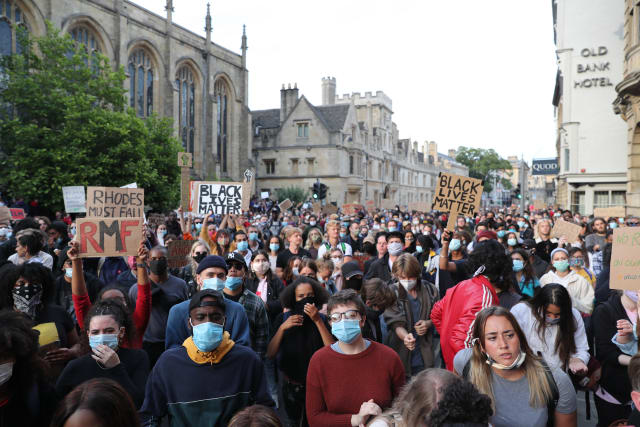 The vice-chancellor of Oxford University said she is “delighted” to see students engage in debate around the Black Lives Matter movement, after a protest saw around 1,000 people gather to demand the removal of a controversial statue from one of its colleges.

Professor Louise Richardson said universities should face questions about who they accept money from and their responsibilities with it but described issues as “complex” and said they are likely to be debated for decades to come.

On Tuesday evening a large demonstration was held outside Oxford’s Oriel College as part of a long-running campaign to get rid of the statue of colonialist Cecil Rhodes.

Speakers called for the college to remove the statue from the High Street entrance of the building and put it in context, as well as protesting against racism across society following the death of George Floyd in the US.

Prof Richardson said the university, which has separately just announced the renaming of its newest college to Reuben College, has “benefited enormously” from having the Rhodes scholarship.

She told the PA news agency: “This is the kind of issue I think that, you know, universities are designed for. We should be having questions about who should we accept money from, what are our responsibilities with that money, how do we judge people, what lens do we use to evaluate people ethically? Today? In the past?

“These are all really important debates and the whole Black Lives Matter debate is a critically important one and I’m delighted to see our students engage in it.

Earlier this week governors at Oriel College said the institution “abhors racism and discrimination in all its forms” but that the college continues to “debate and discuss” the presence of the Rhodes statue.

Meanwhile, Prof Richardson said efforts to diversify the student body at Oxford, which has long faced criticism for a lack of diversity, are continuing as she welcomed an £80 million donation from the Reuben Foundation, announced on Thursday.

Part of the funding will go towards a scholarship programme for disadvantaged students.

On diversifying, she said: “We’ve made progress. It’s slow but it’s steady. The number of BAME students for example has increased from 14.5% to 22.1% in five years. The number of black students, admittedly from a low base, has gone up 100%.”

Reuben College, which had been known as Parks College when it was established last year, is due to take in its first students in the autumn of 2021.

Its initial research themes will be Artificial Intelligence and machine learning, environmental change, and cellular research which includes vaccine development.

Prof Richardson said: “Thanks to the extraordinary generosity of the Reuben family, Reuben College will join the storied ranks of Oxford Colleges. For generations to come, the lives of young people will be transformed as they learn to engage in research that pushes at the frontiers of knowledge.

“Now, more than ever, our society needs a new generation of highly-educated researchers to address the global challenges that transcend national borders.”