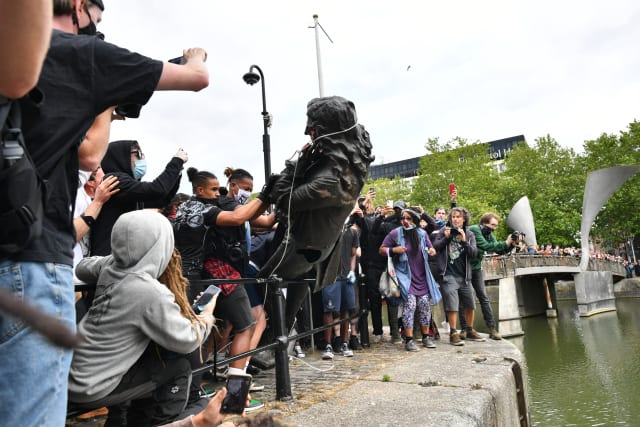 There was “no lack of courage” when officers in Bristol made a tactical decision not to intervene after a statue of slave trader Edward Colston was toppled by protesters, the chief constable said.

Andy Marsh, chief constable of Avon and Somerset Police, described how the bronze memorial was pulled down with ropes in just two minutes before being dragged and thrown into the harbour.

Home Secretary Priti Patel is reported to have had a “firm” discussion with Mr Marsh about why officers did not intervene when the statue was torn down during the Black Lives Matter march.

He said: “Had they intervened, I think the consequences could have been incredibly serious and we might have become the epicentre of a new wave of protests around the whole world, never mind what would have happened in Bristol.

“They decided not to. We have got massive amounts of CCTV and social media footage of who is responsible.

“They made the decision that post-incident, the long arm of the law, so to speak, could catch up with those people and bring them to justice and our objectives, protecting life and property, were better served by not intervening.

“I think they acted with common sense, sound judgement. There was no lack of courage.”

Mr Marsh said the force would carry out a “painstaking” review of the footage, interview suspects and present a case to the Crown Prosecution Service “as quickly as possible”.

He acknowledged that some people were “angry” about the lack of intervention by officers but urged them to understand why that decision was taken.

Officers were first aware of people on the statue from CCTV footage and would not have been able to prevent it from being toppled, he said.

“You have have to stand back and look at what happened over that protest. Over 10,000 people, a very volatile situation. No injuries, no arrests, one report of damage.”

The force’s decision has been publicly supported by Ms Mountstevens.

She told Mr Marsh on Wednesday that she believed he and his team, including Superintendent Andy Bennett, did “exactly the right thing”.

“It’s not for politicians nationally or locally to start second-guessing police operations on the ground,” she added.

Thangam Debbonaire, Labour MP for Bristol West, had previously called for the Colston statue to be removed.

“As a law-maker, it would be contradictory for me to condone or actively support breaking the law and I have to be consistent in this,” she tweeted.

“However, I supported and still support the decision of Avon and Somerset Police in how they policed Sunday and I most definitely do not mourn the statue.”

On Wednesday, Bristol City Council announced that a commission of historians and other experts would be set up to research the city’s “true history”.

Mayor Marvin Rees confirmed the statue of Edward Colston would be retrieved from the harbour and exhibited in a museum, alongside placards from the Black Lives Matter protest.