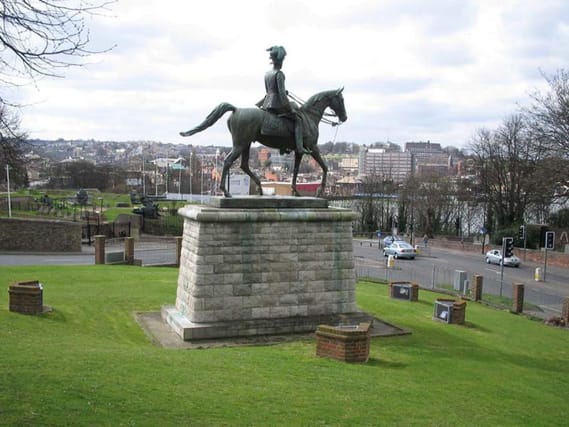 An NHS nurse is spearheading a campaign to have a statue of “racist” Lord Horatio Kitchener pulled down.

Jacqui Berry drives past the large bronze statue of the famous field marshal every day on her way to work at Medway Hospital, where she works in the intensive care unit.

After the toppling of the figure of Edward Colston in Bristol last weekend, Ms Berry says the statue of the controversial Lord Kitchener in Chatham, Kent, should be next to go.

Ms Berry, who lives in nearby Strood, and friends have organised a petition to have the statue removed.

Speaking to the PA news agency, she said: “I just don’t think that we should put someone on a pedestal who oversaw the massive expansion of the first ever concentration camps.

“Any reasonable person can see why it’s a problem to have somebody who oversaw such widespread death and destruction on a massive plinth in a town centre in 2020.”

The memorial depicts Lord Kitchener on horseback looking over Chatham and is located near Brompton Barracks.

Originally displayed in Khartoum in Sudan, the statue was unveiled in the Kent town in 1960.

Ms Berry, 32, added: “It’s not about saying we want to erase history.

“Only by drawing attention to this sort of thing do we learn what actually happened.

“In reality, millions of people around the world have died in the name of the British Empire.”

She said the statue was an “icon of a racist figure”.

The statue is not on Ministry of Defence-owned land, the PA news agency understands.

An MOD spokesman said: “The Government supports the settling of this issue democratically.

“Existing planning processes are in place for the public to propose and crowdfund for new statues, should they wish to do so.”

Lord Kitchener won fame and notoriety as a British Army officer during colonial actions in Sudan and South Africa.

In particular, his legacy has faced criticism over the use of scorched earth policy and concentration camps.

When the First World War broke out, Lord Kitchener was appointed secretary of state for war and helped build Britain’s first mass army.

His face featured on the famous “Your Country Needs You” Army recruitment posters.

The petition can be accessed here: https://www.change.org/p/medway-council-take-down-kitchener