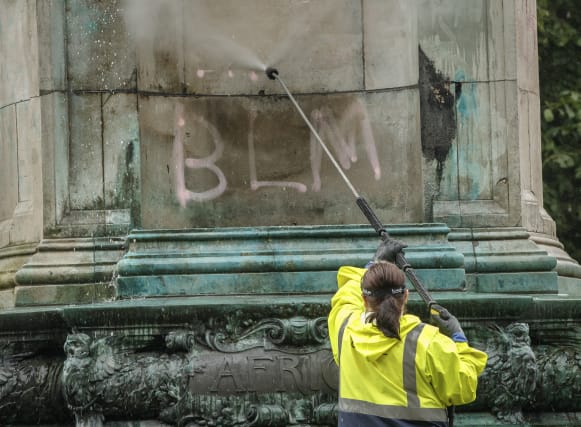 A Government minister has called for decisions over the future of controversial statues of historical figures to be taken democratically as pressure mounts on authorities to remove contentious monuments.

In the wake of protests over the death of George Floyd in the US, local campaigns and online petitions have featured demands for universities, a hospital and councils to take down statues of individuals linked to the slave trade or to re-label buildings named after them.

Business minister Nadhim Zahawi told BBC Radio 4’s Today programme that people should be able to examine the UK’s history “warts and all” without a feeling of “self loathing” and forgetting “the good things we’ve done”.

He argued that the priority should be on improving the opportunities for people from black, Asian and minority ethnic (BAME) backgrounds, with people deciding how political leaders respond via “the ballot box”.

They also come as contractors spent Wednesday morning trying to clean off graffiti daubed on a statue of Queen Victoria on Woodhouse Moor, Leeds, including the words “murderer” and “slave owner”.

Leeds Central MP Hilary Benn told BBC Look North the death of Mr Floyd had “appalled” people, but “vandalising Queen Victoria’s statue is not the way to go about expressing the anger that many people feel”.

He added: “There’s a debate to be had about some statues. I don’t think we should be commemorating slave traders. But let’s have that debate in a proper way, and not by acts of vandalism like this.”

Labour-led councils across England and Wales have agreed to work with their local communities to look at the “appropriateness” of certain monuments and statues on public land and council property.

Mayor of London Sadiq Khan has also announced a new commission to review the capital’s landmarks.

According the Liverpool Echo newspaper, the University of Liverpool has agreed to re-title a halls of residence after students demanded it remove former prime minister William Gladstone’s name due to his views on slavery.

Meanwhile, a website called “topple the racists” has compiled a list of around 60 statues and other memorials across the UK it argues should be taken down, because they “celebrate slavery and racism”.

Created by the Stop Trump Coalition, a group of organisations that originally united to protest against the US president’s visit to the UK, the website invites people to submit suggestions.

Among its targets are memorials to Sir Robert Peel, seen as the father of modern policing after he founded the Met in London in the 19th century, in Birmingham, Tamworth, Bradford and Leeds.

The entry pinpointing a statue of the former prime minister on Pershore Road in Edgbaston claims that policing has “disproportionately targeted the poor and ethnic minorities world-wide for centuries”.

Other targets include a statue of Thomas Guy outside the London hospital he founded and is named after him, because he made his fortune from a company that sold slaves.

A spokesperson for Guy’s and St Thomas’ NHS Foundation Trust said it would work with Mr Khan’s commission to “consider the right way forward”, adding that it is “fully committed to playing our part in ending racism, discrimination and inequality”.

An online petition to rename a Wetherspoons pub named after Elihu Yale, a 17th century merchant linked to the slave trade, in the town centre of Wrexham, north Wales, has gathered nearly 500 signatures.

Another petition to take down a statue of Robert Clive, known as Clive of India, in Shrewsbury, Shropshire, which criticises the 18th century figure for his role in “disastrous” colonial policies, has received more than 7,000 signatures.