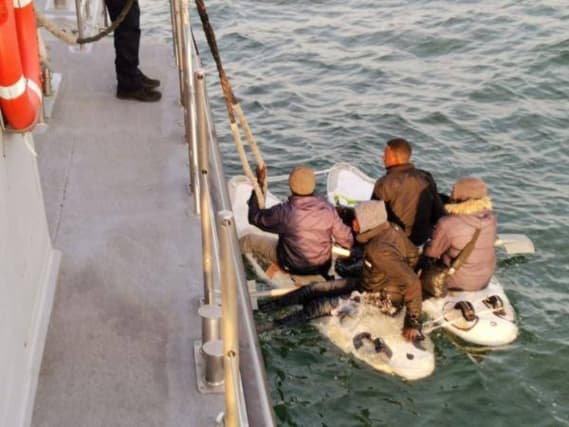 Four migrants tried to cross the English Channel aboard a makeshift raft made from two windsurfing boards that had been lashed together.

They sought to make the perilous journey on Wednesday using shovels as oars and were spotted by the Dunkirk Seaways ferry about 5.5km off the coast of Calais.

Staff on board the ferry then sent a warning to French authorities at about 12.25am.

Tired and suffering from mild hypothermia, the four people were rescued by the French navy at about 6.45am, authorities said.

They did not appear to be wearing any lifejackets or buoyancy aids, despite the low sea temperature and dangerous waters.

They were taken ashore at Dunkirk and handed over to border police.

More migrants are believed to have tried to cross the English Channel on Wednesday.

At least two Border Force boats, the cutter Hunter and coastal patrol vessel Speedwell, have been in operation off the UK coast.

At least 1,440 migrants have now crossed to the UK on small boats since the coronavirus lockdown was announced, according to data gathered by the PA news agency.

This is despite the continuing coronavirus crisis and repeated warnings of the dangers of crossing the English Channel in small boats.