Dusty kitten rescued through roof after getting trapped in cavity wall 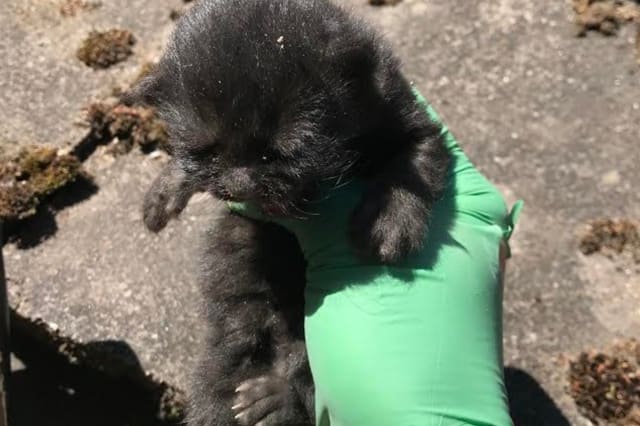 A two-week-old kitten has been rescued after its meowing was heard through the cavity wall of a garage.

The animal could be heard crying through the wall of the property in Warrington, Cheshire, after falling through a gap from the loft space, where its semi-feral family had been living.

The garage owner called the RSPCA and animal collection officer Lauren Bradshaw was able to pull the kitten to safety through the roof.

She said: "The caller had made a hole in the ceiling to try and access the kitten but was unable to reach him so we decided to try and get access via the roof instead.

"We removed a couple of roof tiles which meant I had a clear view of the little kitten and could just about reach him and pull him to safety.

"He was a little dusty, hungry and thirsty but otherwise unharmed and doing okay.

"We reunited him with his three other siblings who were living in the garage right away but as they are only a couple of weeks old, we really needed to reunite the litter with their mum – who was nowhere to be seen."

The kittens were taken to the RSPCA Wirral branch after their rescue last Tuesday and a trap was set in the garden to try and catch their mother.

Ms Bradshaw said: "Time was against us. We were worried her milk would start drying up if we didn't catch the mum soon but thankfully just hours later, I received a call that the mum had gone into the trap so I dashed over there and took her straight to her kittens.

"They were all pretty happy to be back together!"