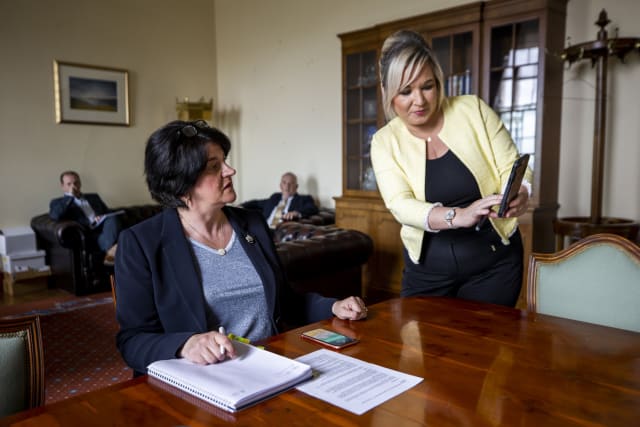 Dealing with the coronavirus emergency has fast-tracked the rebuilding of working relationships derailed by Stormont’s powersharing crisis, Northern Ireland’s leaders have said.

The pandemic struck the region less than two months after the restoration of devolution, following a three-year political row between coalition partners the DUP and Sinn Fein.

DUP First Minister Arlene Foster and Sinn Fein Deputy First Minister Michelle O’Neill, who now lead the new five-party coalition, said they have learned to “differ well” during the Covid-19 emergency, so that inevitable disagreements do not divert attention from common goals.

The leaders, who this week granted the PA news agency behind-the-scenes access to the inner workings of the Executive Office, said the fact that both their mothers were admitted to hospital during the crisis has also created common ground between them.

Mrs Foster said the crisis has hastened the development of working relationships.

“I don’t think there’s any doubt about that, because when you are faced with something like that you just have to put other things to one side and just get on with the common issue, the big issue of trying to save lives and protect the health service, and that’s what really drove us from late March onward,” she told PA.

“There’s nothing more important than trying to protect life, so obviously that’s the critical issue.

“All of that has put us in a position where I think we set aside things that would have been very important to us ordinarily in the set-up of an executive.”

Ms O’Neill said she believes her party and the DUP have both gained a better understanding of each other during the last few months.

“We were literally just through the door again, just trying to bed things down whenever it hit,” she told PA.

“You’ve heard Arlene joking that we’re nearly practically part of the one family now, because we’ve been working that closely together.

“I think the necessity to deal with the pandemic has meant that we have all learned how to work together, and perhaps there’s a greater understanding of each other.

“Perhaps that’s another positive in the middle of everything.

“There’s a good working relationship – that doesn’t mean we’ll always agree, we’re adults, we’re going to disagree, we have very different political perspectives, but we also have common ground and the common ground obviously is dealing with the crisis.”

And there have been disagreements around the executive table, particularly in the early days of the crisis, when Mrs Foster and Ms O’Neill clashed about a date for school closures.

“We had a tetchy start no doubt, things were more strained at the start, but we have had to work our way through our problems,” said the Sinn Fein vice president.

“We have some things in common clearly. We might come from very different perspectives and different outlooks and different takes on things, but we are both two leaders, two female leaders at that, and two people who are trying to do our best for people right now.”

Mrs Foster added: “People like to talk about the little bit of turbulence at the beginning of the Covid piece around schools, but I think we’ve manged our way through that.

“Somebody has said to me, if we differ on things, we’ll have to learn how to differ well, and I think we have learned to differ well.”

The ministers also both acknowledge the impact of the shared experience of coping with the hospitalisation of their mothers.

“The fact both of our mothers were in hospital with non-Covid issues, obviously there’s the humanity around all of that,” said Mrs Foster.

“When you are working with somebody every day, of course you have to get on, I don’t think there’s any doubt about that.

Ms O’Neill added: “You have to remember we are human beings like everybody else and face the same kind of challenges like everybody else, so the stresses and strains that families have had, we’ve felt them also for our own families, and at the same time we’re trying to manage everything and keep the response going to the crisis.

“We’re not people apart, we are two people who have the same worries and concerns as everybody else.”

The DUP leader said the dynamic of the new executive would be tested when the coronavirus emergency subsides and ministers refocused on other issues.

“We have been dealing with the pandemic, and to be fair to all colleagues in the executive, there has been a good piece of pulling together and working together and being focused on what we need to do,” she said.

“I think the challenge will come when we move out of lockdown and into the normal run of business.

“I have to say, from the short period we had of that (pre Covid-19) it seemed to be working quite well, we were meeting more often and I think that helps, because if there are issues you can vocalise them and try to acknowledge them and deal with them.

“So we will see as we move out of this period and into the next period.”

Ms O’Neill highlighted that there would be major challenges on the horizon for the executive, on issues upon which parties take fundamentally different positions, such as Brexit and next year’s 100th anniversary of Irish partition/creation of Northern Ireland.

“This has been a good grounding for building relationships for the future,” she said.

“We have many, many challenges ahead of us and we need to be able to work our way through them as best we can, and I think we have established a solid understanding of each other and relationships now that allows us to be able to take those things on.

“It doesn’t mean we will always agree, but it means that we have the basis on which to try to deal with things.”

There have been lighter moments amid the intensity of the last few months.

One came this week, when Ms O’Neill was proudly showing her DUP counterparts pictures of a new barbecue and pizza oven she has put in her back garden in Co Tyrone.

“I got a wee outside kitchen,” she said.

“I love it. Given that it doesn’t look like we’ll be travelling anywhere any time soon I needed a wee bit of solace, and my solace is out the back in the garden.”